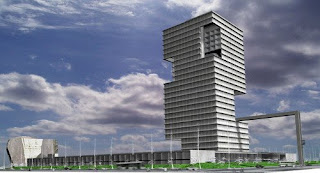 Now Valencia is one of the most recognised cities in Europe for its recent promotion on cultural events in order to drive tourism. This news about the Arteria project in association with Boston in the States which I missed in October brings a whole new era for the city.

Berklee and SGAE officials will break ground October 16, 2008. Berklee Valencia will be housed in a cultural complex called ARTeria Valencia, part of a network of performance and education spaces being constructed by SGAE in several Spanish and Latin American cities. ARTeria Valencia’s modern complex will include a 27-story building. Berklee Valencia will open in 2011.

Berklee Valencia will be unlike any other music college in the world. The curriculum for undergraduate and graduate programs will offer five main areas of study to prepare students to meet the challenges of the contemporary music industry:

— Music for Film and Integrated Media

Berklee Valencia will enroll 1,000 students. Student recruitment will have emphasis on Spain, Europe, Spanish-speaking countries, Africa, and the Middle East.

ARTeria Valencia, home of Berklee Valencia, is one part of ARTeria Multiespacios, a network of multi-purpose spaces being developed by SGAE. The ARTeria includes eight centers in Spain, as well as centers in Mexico City, and Buenos Aires. The centers will have space for dance, music, audio/visual work, and theater, as well as recording studios, classrooms, and SGAE offices.