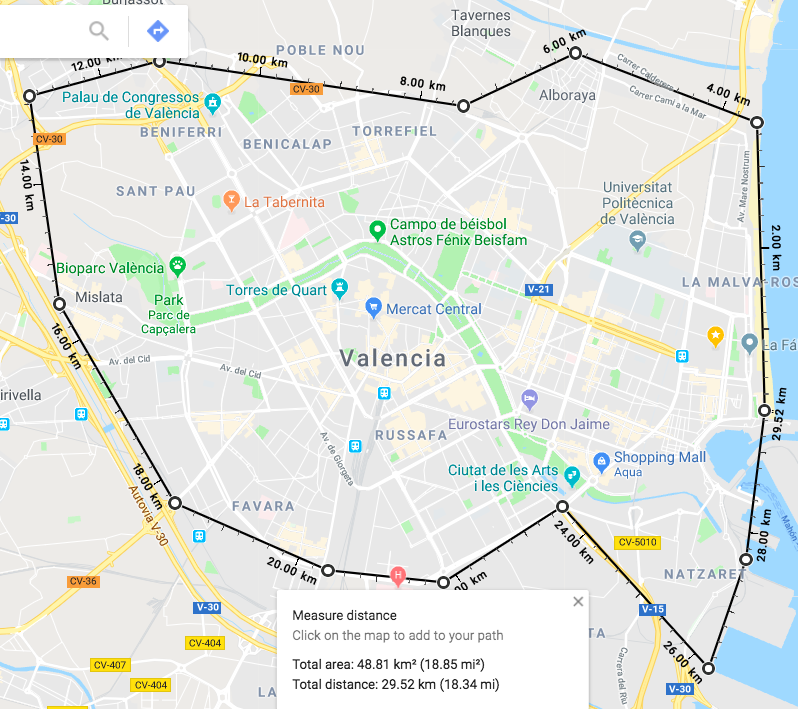 One of the things that we are often asked for by people looking to buy a Valencia city property is that it is in the centre. Often these clients are coming here from London, Paris, New York, or even Shanghai which is the small matter of over 50km by 80km i.e, 100 times bigger than Valencia.

Valencia is around 8km wide east to west from the beach at Las Arenas to Mislata. (That’s just five miles for an American and UK audience)

That means that Valencia metropolitan zone is just 48.81km.

Let’s compare that with Shanghai which is 88.5km North to South.

We can also compare it to New York which is 38km North to South, more than six times as big.

Or London for example. Walking from Barnet to Croydon would take you 8 hours for the 32km and London is more or less as wide too. So it’s over five times as big north to south and four times as big east to west, ie 32 times as big as Valencia. Oh, and it’s congested too, Valencia isn’t.

Now nobody in their right mind would try walking from Barnet to Croydon, that’s pretty horrible mostly, however you might actually like the walk from Mislata to the beach at Las Arenas. The good thing is you don’t have to walk of course but this is just to illustrate how easy it is to get around Valencia. To get across Valencia on the metro at it’s widest point would only take you around 40 minutes.

Or you could even walk it. It takes under 2 hours to walk from one side of the city to the other!

Or you can injure your hand in the Ciutat Fallera to the North of the city and walk all of the way to the new La Fe hospital in just over an hour and a half. Just hope you don’t injure your foot.

What does this mean for your Valencia city apartment purchase then? Well it means that wherever you buy you are never far away from the centre. If we take the Central Market as our central point then take a look at the distances to the various areas of the city where we offer properties. To begin with it’s just 4.7km from the central market to the beach (Under three miles)

It is only 2.5km from the Valencia Central Market to the City of Arts and Sciences.

Now it starts to get interesting when we look at the distances to certain very good value areas of Valencia. It’s just 1km from the Central Market to La Zaidia where prices are much cheaper than in the Carmen area around the market. It’s even closer than Ruzafa is, which is one of the most popular areas of Valencia currently.

It will take you less than 20 minutes to walk from La Zaidia to the Central Makret and it’s a nice walk.

It is just 1.75km to Nou Moles from the Central market, just over a mile or 25 minutes walking

And in Nou Moles you can get this property for example. 142k Euros with four bedrooms, gorgeous sunny terrace and just 300m from the riverbed. Now if you were in El Carmen, Ruzafa or down by the beach there is no doubt that this property would be over 250k. For under 2km difference it makes a lot of sense to look at this type of property and buy yourself a decent lifestyle.

Or you could get yourself a quite amazing renovation project for under 80,000 Euros around 2.5km away from the centre. It’s a two minute walk to Patraix Metro station from where you are in the Plaza de España station near the centre in just two stops, it takes a grand total of four minutes on the underground to get there so in less than ten minutes you are right in the centre of Valencia.

Take a look at the video of this place here. You could make this place lovely for around 30k for a full modernisation.

We are trying to suggest here that you think outside of the box. There are good reasons for wanting to be in Ruzafa, El Carmen, Eixample or the beach areas of Cabanyal, Malvarrosa and the Patacona but equally there are good reasons to be in other lesser known areas of Valencia, to be a pioneer, to discover these areas and find out that you are never far away from the riverbed, the beach, the central tourist areas and more. You get a slice of real Valencian life, good communities, lovely people and away from the tourists and you have your Valencia city property usually at a fraction of the cost of the more popular areas. And how do you get around easily, the metro is good, there are loads of bus routes all over the city and the Valenbisi system for 25 Euros a year is brilliant. Who wouldn’t want to ride a bike around a flat city in excellent weather most of the year?

If you have any questions or want to know more about any of the areas we have talked about or any other areas, then just let us know. The more we discover about Valencia the more impressed we are with so many areas of the city and we think you will agree too. Check out our Valencia city properties here and ask for more information about any of them. 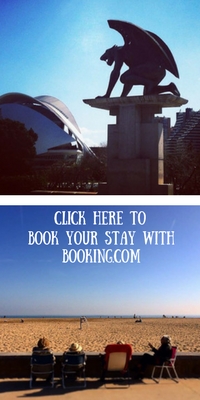 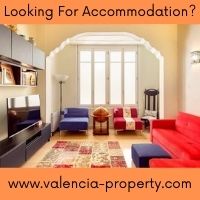