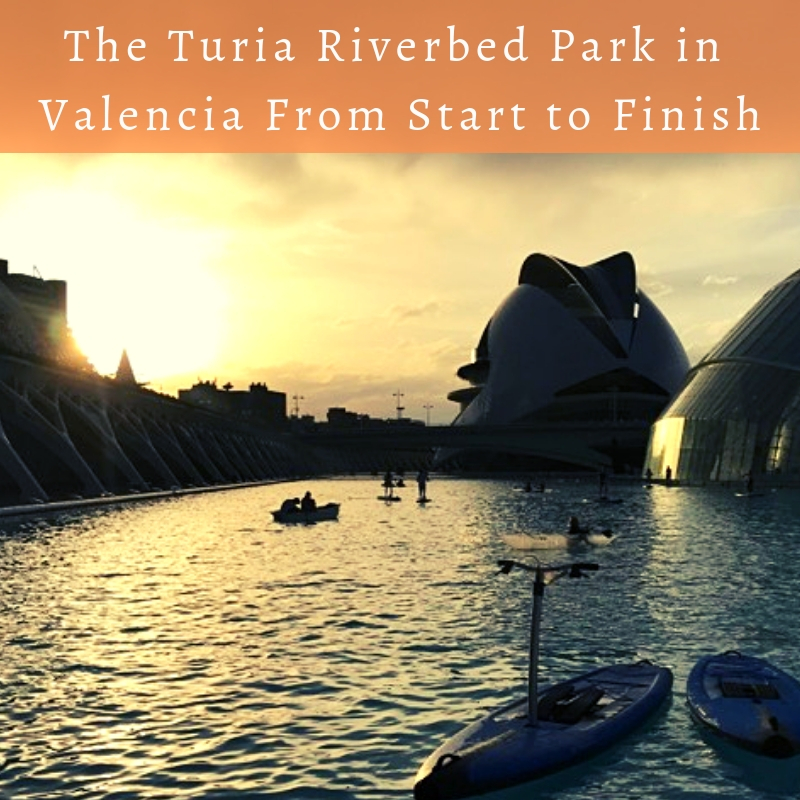 One of the many wonderful things about Valencia city is the ease of living there. Outside space, pavement cafes, a huge sandy beach, public sports facilities and lots of parks for wandering about in, resting up or enjoying time with friends and family. Valencia is truly a city to live in. The highlight of the city for me of these outdoor facilities is of course the Turia Riverbed Park, “the River of Culture” as it is known. Today we are going to take a trip along the riverbed from the start to the end looking at what it has there and which areas of the city stand alongside it.

The process of what happened in 1957 with the flood that devastated the city is brilliantly described in Caroline Angus’ blog post about the flood and its aftermath here. And it is because of this flood that we have what we have today. You can read more about it here too.

We will go downstream as it were when the river used to flow through the city.

The official start of the riverbed park is between Avda Manuel de Falla on the Campanar side and Paseo de la Pechina in Olivereta. However it is now officially extended with the opening of the Parque de La Cabecera. Right behind this park is the Canaleta Park and it is bordered by the Bioparc zoo, (soon to be extended to include an Asian section). Both of these parks lie along the old route of the Turia but they don’t form a part of the Riverbed Park itself.

The first section of the park is typical of what is to come. There is a football pitch, basketball courts, laid out gardens and a maze along with a cultural association and a little bridge crossing it called the Pasarela.

The areas of the park are divided by the bridges that cross the park carrying traffic in and out of the city. The first bridge we come to is Perez Galdos and the next section is bordered by Avenida Tirso de Molina to the North and La Petxina to the south. This second section is best known for its athletics stadium and hockey pitch. The athletics stadium is full every evening with athletes from 6-66 practicing. Many countries send their athletes for winter training to Valencia and this is one of the sites they use for that training. There is a small cafe between the two stadia which is open mostly in the summer. As you will note there isn’t much commerce in the riverbed. It’s more of a public space.

There is a kids’ playground and we then get to the Valencian Glories Bridge, a strange name for a rather normal bridge, with its large pond underneath. The next section is bordered to the north by the Nuevo Centro Shopping Centre, the bus station and El Calvari and to the south by Botanical Gardens until we get to the Modern Art Museum.

This section is full of tree lined walking and cycling paths, they go all the way along the riverbed of course but this section is exclusively composed of these paths and lots of grass areas for lying around reading or relaxing away from the traffic noise of the city itself. You can also find a second cafe here (When it is open) La Masia de Los Jardineros.

After the Puente de Les Arts we get to the shortest section of the riverbed before the Puente de Sant Josep Sigle and it is here you can find Valencia’s Rugby Ground. All of the walking and cycle paths move to the southern part of the riverbed to make way for the rugby pitch, a full sized astroturf pitch.

The next part is also devoted to sport in large part as it were because, before we get to the Puente de Los Serranos and the old entrance to the city through the gates of the Torres Serranos, we have the skatepark, the baseball ground where you can also find softball and cricket being played depending on the time of year. There is also a bar here to supply the players but you can also pop in to watch some sport and partake of a few very cheap beers.

After the Serranos Bridge we get to an area almost entirely devoted to Spain’s national sport, football. Every weekend you will find pickup matches and organised teams using the pitches at all hours. The area to the north has the Pont de Fusta metro stop and to the south there is La Seu, a part of the Old Town in Valencia.

The next part of the riverbed down to the Puente de Real is all gardens bordered by the Fine Arts Mueseum and Viveros Park to the north and the old town to the south. After this part the riverbed opens out a little in the areas known as the Alameda. This area is mostly gardens and paths but does have a stray football pitch just before arriving at the Alameda Exposició Bridge (The Puente Calatrava or Peineta as it is known)

The ninth zone of the park is the most underdeveloped because it has been left as an exhibition space for events and fairs. It is also the area where the nighttime fireworks during the Fallas fiestas occur. It is in this area where Valencia has the April Fair, the Wine Fair, the July Fairground and many more events. There is also a cafe in this area with shaded seating areas.

The next bridge is the Puente de Les Flors (The flower bridge) and then there is a Pedestrian bridge, Puente de la Mar, before the Puente de Aragón. Think landscaped gardens, bike and walking paths and a large pond and you get the idea in this area. It is bordered on the one side by Aragón with Valencia’s football ground and Colón, the upper class residential area, to the other.

The further along we go now the more attractions are in the riverbed. Between the Puente de Aragón and the Puente de Angel Custodio we find the Palau de Música. In front of the Palau are the musical fountains and more landscaped gardens. There is a more expensive cafe under the Palau and you can see people jogging, skateboarding and riding bikes on the Plaza as you sit around the fountains here. On the upper side of the riverbed here we again have Aragón and to the lower part Ensanche another excellent residential area that leads to Ruzafa.

Between the Angel Custodio Bridge and the Puente del Reino we can find the children’s adventure playground, the Gulliver Park. A quite wonderful idea this attracts families every weekend and it is totally free. You are a Lilliputian scrambling over a tied down Gulliver. (You can see the satellite view below) There is also a bike hire place in this part where you can hire four wheel four person bikes for cycling along the riverbed.

As we pass under the Puente del Reino the riverbed opens out a bit and there is a skatepark, mini golf and cafe and then we get to the main attractions of the riverbed, the City of Arts and Sciences. The first building is the Palau de les Arts, the new Opera House.

This is quickly followed by the IMAX Cinema, the Science Museum and then the Puente del Assut D’Or before you get to the Agora (The new arts centre) and the Oceanografic.

The whole of the complex is reflected in the pools of water that surround it. The bike and pedestrian tracks go through the complex and also behind it in the riverbed meaning you can continue towards the sea without stopping to marvel at the buildings if you want.

The City of Arts and Sciences brings an end to the riverbed park because after that it ends for now. There is a bit more before we get down to the port where the river used to empty into the sea but it was used for the Formula One and is currently abandoned and still to be developed. There is now a plan in place for the area of El Grao which includes 20 tower blocks and an extension of the park of 166,000m2. The plan includes placing the current railway line which separates El Grao from the rest of the riverbed underground so the riverbed park becomes even longer taking you from the Parque de Cabecera all the way down to the Marina and Port.

If you want to see more images of the Turia Riverbed Park just do on online search. There are some superb ones. It should be one of the things you visit regularly when you are living in Valencia whether it be for jogging, cycling, pracicing Tai Chi, taking part in team sports including Quidditch!! or just chilling out under a tree and watching the World go by. Valencia’s riverbed park is simply wonderful.