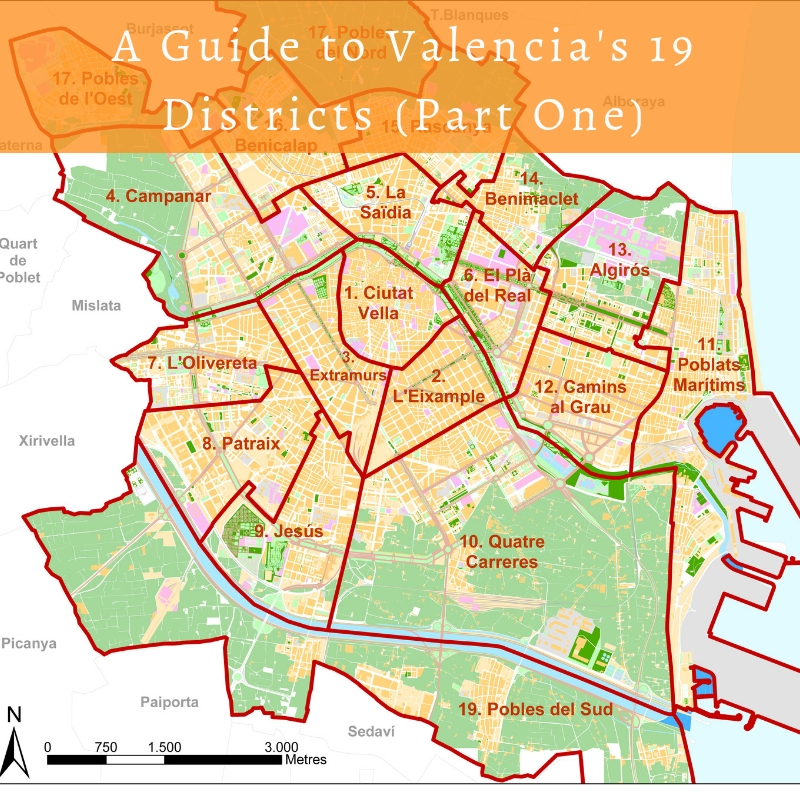 As a city Valencia is just about the perfect size for modern living, not too big but large enough to have plenty going on all year round. As we have talked about before in these pages you are never far away from the centre in Valencia, in fact you are generally near to the centre in most of the 19 districts.

However, for those reading this from abroad your knowledge of the city might not be that of a local so it’s a good time to introduce you to the 19 districts in Valencia and you will also see that names you often see don’t appear. This is because within each district you have various neighbourhoods. Let’s take a look.

Let’s take them in order from 1-19 rather than preference for foreigners buying property in Valencia city.

Ciutat Vella – The Old Town in Valencia comprises six different neighbourhoods: La Seu, El Carmen, El Mercat, La Xerea, El Pilar and Sant Francesc. This is the old medieval centre of Valencia, the original city protected originally by the walls and the river curling around it to the north, now the lovely Turia Gardens. The Ciutat Vella is an area of old buildings, palaces, monasteries, churches and narrow streets set around the Central Market and Cathedral. It is also now largely pedestrianised or semi pedestrianised in great part and contains a lot of Valencia’s central tourist attractions.

From a property point of view you can find smaller apartments, many buildings without lifts and with tiny staircases and lots of short term rentals although over the years this will be changing as now licences are refused in this area of the city for short term lets. There are very few high rise buildings in the centre although around the town hall square and towards La Seu, the banking and commerce area, there are many medium rise buildings with lots of offices. The image below is taken from the top of the Torres Serranos, the old gate to the city, towards the old town.

2) Ensanche/L’Eixample – Comprised of three neighbourhoods including the ultra trendy Ruzafa, and the more expensive Pla de Remei and Gran Via, Ensanche is where traditionally Valencians aspire to live. Close to the centre of the city to be able to walk and not have a car yet far enough away for the streets to be wider, avenues such as Gran Via itself, so the apartments tended to be lighter and you got more space to yourself than you did in the Old Town.

Attractions in Ensanche include the excellent Mercado de Colón for meeting friends, the restaurants of Conde Altea and the area around Calle Salamanca and the new Central Park.

Ensanche is popular for foreign buyers too due to its location and traditional facades along with the outside lifestyle of pavement cafes, restaurants and parks. Ensanche is also criss crossed these days by a huge network of bike paths. Valencia has expanded its system of bike paths from 31km to 159km in the last couple of years.

3) Extramurs – The area to the west of the Old Town comprised of El Botanico, La Roqueta, La Pechina and Arranpins is similar to Ruzafa in the sense that you are close to the centre, it has a large cafe society area, it has its own attractions such as the Botanical Gardens, a good part of the riverbed, the Abastos market and the Chinatown area near to the main railway station. It is popular with students for going out especially around Calle Juan Llorens and Abastos and it has some wide avenues such as Fernando el Católico which has some extremely handsome buildings on it overlooking the trees down the avenue.

Traditionally not as popular as the aforementioned areas for foreign buyers, Extramurs is now coming into its own as people discover the delights of this area and the ease of getting there both by metro from the airport or on foot from the centre.

4) Campanar – We move to the north side of the riverbed for our next area. Campanar, Les Tendetes, El Calvari and Sant Pau comprise the area of Campanar. The best known is Campanar with Old Campanar being a closely packed pedestrian area of two floor houses and Nou Campanar having lots of high rise buildings with shared pools and padel courts.

El Calvari and Les Tendetes are cheaper areas of mostly 60s and 70s buildings congregated around the old La Fe hospital and the Nuevo Centro shopping centre, and yes, they are pretty ugly. Sant Pau continues the extension of Valencia into new areas of high rise buildings with shared facilities.

Campanar has the great advantage of being near to both the Old Town via the riverbed park and also having the Bioparc Zoo at the other end with the Parque de Cabecera at the end of the riverbed. Again, there are plenty of places to go out and eat and drink as well as taking your picnic down to the Parks to enjoy Valencia. It’s also a great place for getting out on your bike and into nature within the city itself.

5) La Zaidía – Again to the north of the riverbed and east of Campanar with easy access into the centre of the city we find La Zaidía. Comprising Marxalanes, Morvedre, Trinitat, Tormos and Sant Antoni, La Zaidía is more rough and ready than Campanar on its western part with the buildings being more similar to those found in El Calvari and Las Tendetes. However, once you get to Morvedre and Trinitat you can find ample buildings with more thought given over to design and the excellent Jardines del Real limiting it to the East.

It is well served by the metro system with the terminus at Pont de Fusta leaving you a short five minute walk to the riverbed and old town. The riverbed in this area has the rugby pitch, the baseball ground and much more making it an attractive area to live at a reasonable price. There is also the new Bombas Gens arts centre on the limit between Les Tendetes and Marxalanes and along with the Carme Theatre the Teatro Flumen, and the better known Museo de Bellas Artes it is becoming an area that radiates creativity but is less known than the Carmen in the Old Town with its Modern Art Museum and Centro Cultural del Carmen.

6) El Pla del Real – Comprising Mestalla, Exposició, Jaume Roig and Ciudad Universitaria, Pla del Real has some of the most attractive lesser known buildings in Valencia including the impressive Westin Hotel, the old Tabacalera buildings now converted into council offices in large part, the Palau de Música by the riverbed and some of the more impressive bridges that cross the Turia such as the Puente de las Flores, La Peineta and La Puente de la Mar.

Of course you can find Valencia football club still at Mestalla although they still insist they are moving to their new stadium in Benicalap by 2022. and you also have the excellent art house cinema Babel just off Avenida de Aragón. The traditional old University faculties of Medicine, Law etc… can be found along the first part of Blasco Ibañez so this area tends to attract a lot of students, doctors and nurses. Avenida Blasco Ibañez is a very wide tree lined avenue with medium and high rise buildings leading down towards the beach.

In the second part of this article we will be looking at the areas surrounding the central part of the city featured in this article. If you like the article then share it on social media and if you have any suggestions of places we should include in each part of the city then send them to us and we will add them in. Also you might like the following articles including our mega 112 Reasons to Live in Valencia post. Just click on the images for the links.