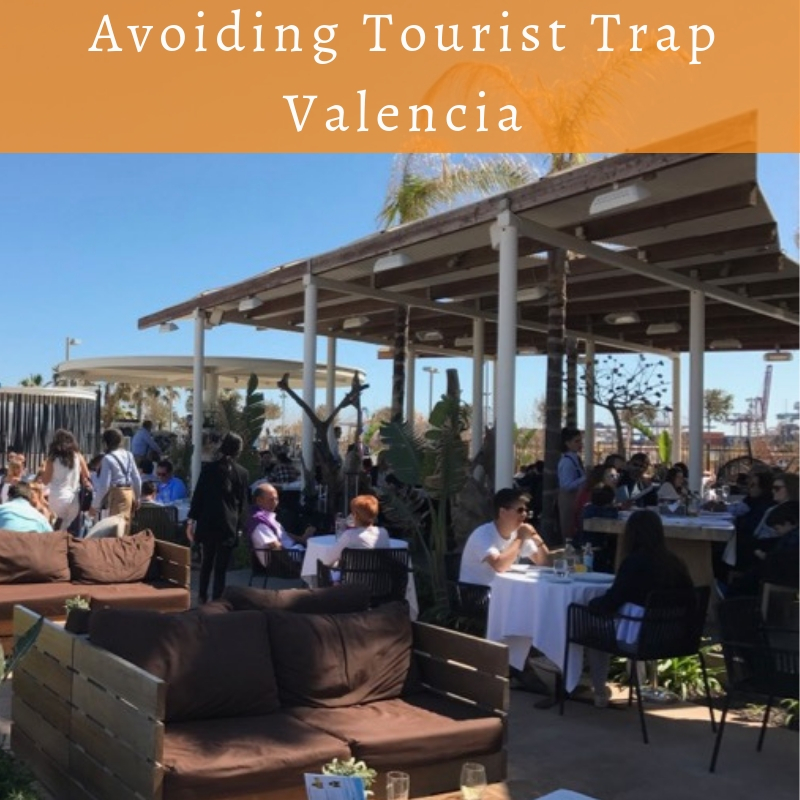 I was wandering around central Valencia yesterday before picking a client up in the centre and realised that over the last year or so the centre of Valencia has changed radically. And on a couple of roads it’s not good. There are too many tourist tat shops now, it’s not at the level of the Ramblas in Barcelona where almost every place is a souvenir shop selling rip off Messi shirts, but souvenirs, quick snack sandwich bars, bike hire places and apartment rental places are now much more conspicuous in the centre.

Of course, we are interested in a more Valencian lifestyle where we support local businesses in our neighbourhoods, where we use local facilities such as the Valenbisi bike service and don’t have to fight our way through “influencers” taking selfies in front of iconic buildings in Valencia (Although we will very soon publish a post on the top ten Instagram friendly places in Valencia if you are that way inclined).

So, today’s question is where are the most touristy places in Valencia so we know how to avoid them?

One of the best places in Valencia can be one of the worst for tourist hordes. Make sure to go early to avoid tourists and don’t try to have a coffee at Camarena’s bar in the market because locals don’t do that. They will go to the old man bars around for a decent coffee at half the price and without the queues. Also the area to the front and side of the market towards La Lonja is now known as paella city. Too many bars with Menus Del Día invariably including some really iffy versions of paella.

The Central Market is still the best place to buy fresh food but tourists don’t tend to do that. Support the market traders there by buying your food there or bit by bit the food stalls will disappear and to be replaced by souvenir and tat shops.

On the riverbed side of the Torres Serranos there is an open esplanade allowing plenty of space for “influencers” to do a twirl in front of the towers and have their photo taken looking natural with their hair all wind blown. Bleurgh! Between this and the fact that nearly every bike tour and Segway exploration tour stops on this open area it’s probably best to avoid this bit. Best to cross the river at any of the other bridges crossing the Turia Riverbed Park (Except the Puente de las Flores, it’s the same there)

On the town hall square in Valencia many of the shops are now overpriced cafes and souvenir shops. The wide pavements are now narrower due to the cafe terraces meaning the remaining pavement tends to get bottlenecks as tourists on their phones suddenly stop to take a picture of an amusing fridge magnet or the cow sticking its head out of the Alehop shop.

Take a short walk just 100 metres away from the town hall in any direction and you can find better cafes, better prices and fewer tourists.

Paella Restaurants by The Beach

There are exceptions of course but the vast majority of the Paella restaurants by the Malvarrosa Beach are not good. There are a lot to choose from but the best choice is somewhere else for a decent paella. You may want to visit La Pepica because Hemingway once went there but sometimes the paella is described as being made around the same time as his visit. Let the tourists, and especially the cruise tourists who never venture far from the port, take those places. It’s much better to try and get a place for your paella at El Palmar on the Albufera. Oh and avoid the Marina Beach Club, they are so up themselves it’s unbelievable.

You probably know other places that are smothered in tourists at times so let us know in the comments where else you think we should avoid. Valencia has enough fantastic places off the beaten track, down the side alleys and in all of its neighbourhoods to satisfy you.

Take a look at our property pages here and click on the images below for more articles about living in Valencia.