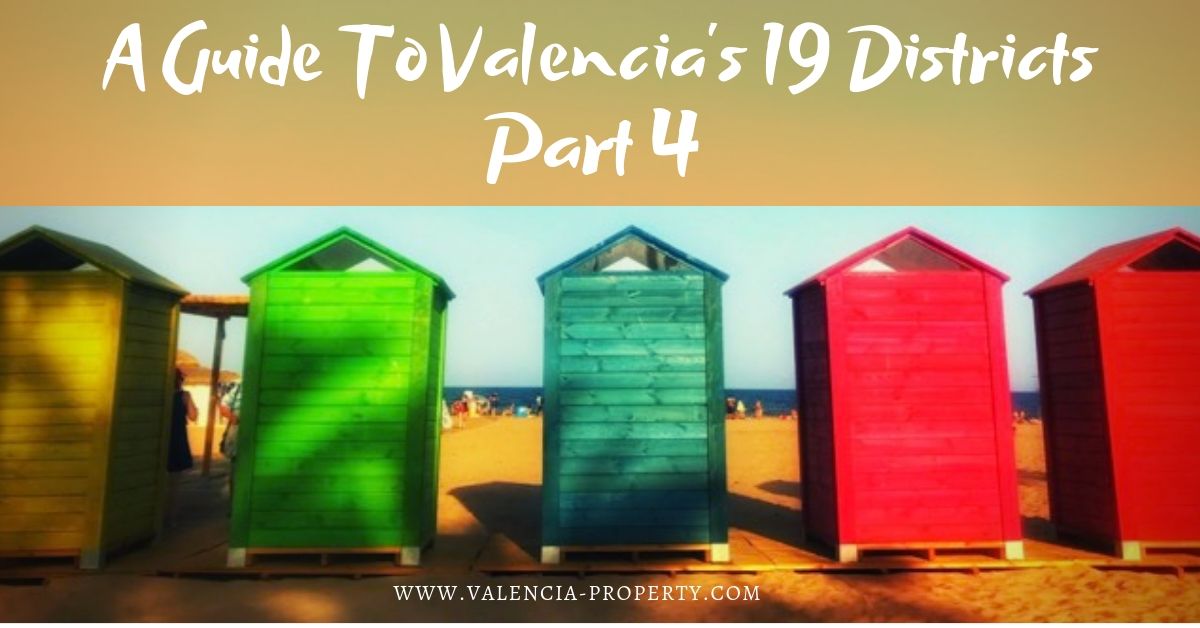 Welcome back to our Guide to Valencia’s 19 districts. In part 4 we are looking at the edges of the city so we are not only including the final districts actually included in the city limits itself but also the peripheral districts and towns we like that are just as close to the city centre as many of the areas included in today’s part of the guide.

17) Poblados del Norte – Valencia is surrounded by a Green Belt known as the Huerta. The Huerta translates as the Orchard. It is where the typical Valencian produce from Oranges to Artichokes to Tiger Nuts for Horchata to Onions, Tomatoes, Almonds and Olives are grown. Interspersed in this large flat expanse of small farms and allotments you find the Poblados del Norte.

Officially there are seven towns in the Poblados del Norte, Benifaraig, Pueblo Nuevo, Carpesa, Casas de Barcena, Nahuella, Masarrochos and Borbotó. They seem isolated, islands in the fields if you like, and if you are looking for a bit of quiet just outside the city then they may interest you. For our purposes, looking at property in and around Valencia we don’t take much notice of them. We have had houses for sale in the fields nearby to these towns in the past and oftentimes the houses have character having been built a long time ago with large wooden doors, interior patios and more but the area lacks something and more importantly the houses tend to be by the side of the through road of the village meaning they get quite a bit of traffic which obviously cannot go through the surrounding fields.

The only place that bucks this trend is Masarrochos but that is not really on the edge of Valencia, you are already out past Godella and Rocafort by the time you get there. Masarrochos has a few estates around it that offer houses with shared facilities and views towards the Mediterranean as it is the only part of the Poblados del Norte that is not as flat as a pancake.

18) Poblados del Oeste – Much more interesting from a property point of view are the two Poblados del Oeste. There are just two, Benimamet and Beniferri and the latter is very small and mostly known for the Casino and the Congress Palace. Benimamet, however, is a small town in its own right with some very interesting buildings and very interesting prices. Very much a working class village it is on the metro line into Valencia from Lliria and has good public transport links as well as being just a ten minute bike ride into the city optionally through the Huerta.

Benimamet is rather overlooked by people wanting apartments in Valencia as it seems to be out on a limb and some of the apartment buildings are, let’s face facts, pig ugly. However for investors looking to buy apartments to rent out Benimamet gives an excellent return and for young people and families looking to get onto the property ladder Benimamet is an excellent option with decent nurseries and schools and plenty of cafes, supermarkets and independent shops giving it a life of its own. Having the metro line right in the centre too and underground now a new park has been built on top of it makes it quite cute too.

Bear in mind also that the top part of Benimamet contains the Trade Fair buildings. These are huge and have over 30 events on every year bringing plenty of business into the town and city itself. The only issue with the trade fair is that during the biggest fairs, Cevisama etc… parking can be an issue at the top end of town.

The Albufera lake dominates the area to the South of Valencia. It is a huge inland lake where you will find boat trips, birdwatching and the best Paella in the World. Most of this activity is based around one of those eight areas to the south of Valencia, El Palmar. Surrounded by the lake and the marshes, El Palmar can get really full of Paella hungry Valencians most weekends of the year but the quality is amazing. However, property coming up for sale is rare in the town and when it does you can guarantee a local will snap it up before it comes onto the market and convert it into a Paella Restaurant!

Between the Albufera and the sea there is the semi peninsula of towns that include Pinedo, El Saler, and El Perellonet.

Pinedo is the closest to the city and is just to the South of where the Turia river now disgorges its contents into the sea. Out on a limb, abandoned and scruffy, Pinedo has a bad reputation among Valencians but does offer some great eating options by the beach. It even has a Go Kart track and a drive in cinema from when it made a rather puny effort at attracting tourists. If you are into your dog then there is a special dog beach in Pinedo.

Further south we find El Perellonet and El Perelló two eyesores worthy of the worst development of the 1960s and 70s. If you fancy something overlooking the sea and don’t mind the remnants of abandoned projects and glints in the eyes of 1960s architects whose only previous experience of construction must have been abatoirs then this area may turn you on. Needless to say it does nothing for me. The good point is that you are never further than a couple of hundred metres from the sea, the bad point is you are still in El Perellonet.

The other four areas of the Poblados del Sur are Faitanar, Horno de Alcedo, Castellar-Oliveral and La Torre. They are all overlooked by the southern by pass for Valencia the V30 and are best known for driving past them and wondering what they are like on the way to IKEA and the MN4 Shopping Centre. Truth is they aren’t great and don’t offer much if you are looking for property to invest in around Valencia. Much better are the areas we shall now move onto which, although not considered Valencia touch the city and are just as handy for living in the city area.

Alboraya is of course our first recommendation. We have written about it before here. Alboraya is divided into three separate areas two of which can be considered parts of Valencia even though they aren’t. The Patacona beach is lovely although most of the property are new build apartments built post 2000. There are some excellent houses overlooking the beach but they are mostly restaurants now and are extremely expensive. The apartment blocks behind tend to offer sea views. The old town of Alboraya is lovely and is now an extension of the city of Valencia itself with its own metro stop too. The third part just 4km to the north of the city is the Marina of Port Saplaya, beloved by so many sailors and beach lovers. However it does have an element of being out on a limb as the access is from the motorway to the city and it is hemmed in against the sea by the motorway.

Our next recommendation is Burjassot. Burjassot can almost be considered a part of Valencia now although it retains a character and life of its own. Just across the CV35 from Benimamet, Burjassot is on the metro line and a short drive out from Valencia. It extends into Godella with which it shares a second metro station on the Betera line and has a defined centre, cultural events and concerts on a regular basis and it also houses many parts of the University Campus and Valencian TV. Property in Burjassot ranges from apartments to townhouses and is very well priced and there is a wide variety of styles and years of construction. It’s very easy to get to all of the international schools and in and out of the city from Burjassot and as it’s on the metro line getting to the beach is no problem either.

Finally we are going to go out further from Burjassot for Godella and Rocafort, again both are on the metro line and also Paterna which is a continuation of Benimamet. All three places are relatively decent sized towns with a defined centre, shops, cafes, restaurants and other facilities. Godella and Rocafort have areas of huge mansions and large houses with beautiful gardens and also town houses and apartments. Paterna is more of a working town with a large military base in it and is between the city and the airport for easy access to both. It also includes the huge Valterna development where you can find apartments with shared pools, gyms etc… on the edge of the city by the Liceo Frances school.

All three areas are good options for living and working in or around Valencia.

That’s it then. Our guide to Valencia’s 19 Districts is over. You can find the first part here, the second here and the third here. Or just click on the images below.