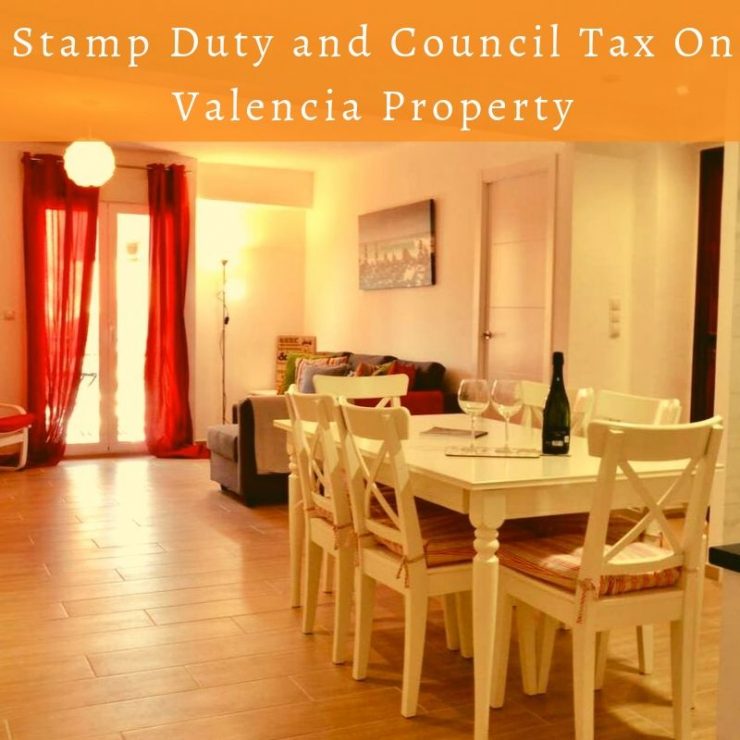 We have talked before about taxes on property in Valencia and Spain but we often get asked questions about why the purchase tax is 10% as a flat rate. We don’t want to bury the lead here so you should know despite appearances, taxes on property in Spain are comparatively low. See why below.

One thing we always remind people is that when buying a property you should also take into consideration the ongoing taxes on the property and therefore you should look at how much council tax costs each year. If buying an apartment you should also take into account community costs in the building that you buy your property. To do this we are going to run a comparative costing with a property in the UK where council tax bands are easy to find out. Take a look.

We get into the long grass on the figures in this article so buckle up!

Firstly, on purchasing a property in Valencia you pay 10% tax, no ifs no buts, you pay 10%. It’s a pain in the backside. However it is a flat rate, and needs to be paid. In our example today we are going to use two prices, 150,000 Euros and 280,000 Euros just because I think maths should be made more difficult ;-). In the UK examples we will use 130,000 Pounds and 260,000 Pounds even though Brexit will soon make the pound worth just a Euro.

In the 150k Euros example in Spain you would pay 15000 Euros tax. This money must be paid within thirty days of purchase but is usually deposited with the Notary on day of signing and the Notary and Gestoria arrange payment for you so you don’t get a fine. So your upfront cost is 15k.

Council tax on this sort of property in Valencia is really difficult to say as it depends on a sum of 0.886%xVC (Catastral Value of the property) There are also discounts for people living in the historic centre and other historic buildings. However, we can say that a typical property of 70-80m2 in Valencia will pay around 300 Euros per year in council tax. Our example at 150k may be 250 Euros and the 280k later may be 400 Euros.

Let’s assume the property is in a building with a lift and therefore the community fee is likely to be around 40 Euros per month, so 500 Euros per year approximately.

When we take those costs over ten years, the average time our clients hold a property for, then the total tax and costs bill will come to around 15k for Stamp Duty, 3000 Euros for Council Tax and 6000 Euros for community fees. Let’s also allow for increases in both council tax and community over that time and maybe we get to 4000 Euros in IBI and 8000 in community fees. So a total of 27000 Euros on a purchase of 150k, making a total tax bill of 18% or 1.8% per year (Mostly paid upfront, or at least 10% of it)

A friend of mine has recently bought a property in North Tyneside in the UK, so not the centre of the Universe and therefore a good representation of council tax and community costs. The Stamp Duty on a property at 130,000 Pounds Sterling was 5% as it is a second home (It would be 2% on a first home. However the first 125k is charged at 3% so to make the maths easy let’s call it 3%.)

The community fee is 1% of the purchase price per year meaning 1300 pounds per year which will rise in line with inflation.

The council tax is 2577 Pounds per year as the property comes into Band F in the local area. There is then something called the Leasehold. This doesn’t exist in Spain mostly as properties are sold with a percentage of the Freehold. They estimate this tax to be around 400-600 pounds per year. So the cost of purchase was 3%, 3900 Euros, the ongoing yearly costs amount to roughly 4300 pounds per year giving a total over ten years of 46900 pounds without taking any inflation into account. This gives us a total tax bill of roughly 36% divided by ten years meaning a total tax bill of 3.6% per year (Mostly paid every single year as opposed to upfront)

Even if we take off the Stamp Duty completely in the UK as it is not a second home and it is only just over the 0% rate for houses under 125k for example then the other costs still apply giving an effective total tax rate of 3.3% per year.

If we then go to a property at 280k in Valencia we are faced with similar costs, 10% tax upfront, 400 Euros per year Council Tax, the same community fee as before. This gives us a lower percentage tax over the years as the Council Tax and Community are lower percentages of the property cost. Effective total tax rates would be around 16% of property cost or 1.6% per year.

When we do the same in the UK on a property at 260k then the Stamp Duty is higher at 5% on first homes and 8% on second homes or rental properties. The council tax band is higher and rises by around 20% per band in most places and the community fees and leasehold costs are higher. It is therefore likely that the effective total tax rate spread over ten years would be just over 4% annually!!

As we can see it is considerably more expensive in terms of taxes to buy a home in the UK than it is in Spain and that is before we take into account living costs such as utilities etc… as we pointed out in our post earlier this year here.

And the good news is that the longer you hold the property the better the comparison becomes because it costs roughly 20% annually of what it does in the UK to own a Spanish property. Once you get past the five year stage it is always cheaper in terms of tax to buy a Valencia Property as opposed to a UK property and the longer you hold it the cheaper it is comparatively.

This is also very useful if you decide to rent out your property because most of the income isn’t eaten into by ongoing costs. The tenants pay their bills of course but the Council Tax and Community fees are usually below 10% of the rental income annually and the community fee is often paid by the tenant. In the UK this is certainly not the case.

In this article we have looked at the comparison between owning a property in the UK and Valencia but we could do similar with the United States where Condo Fees are off the scale but Stamp Duty is around 2% depending on the State and the value. There is a Mansion tax of 1% on properties over 1 Million dollars too. The Condo Fees are usually over 500 dollars per month and insurance is very high too meaning a huge yearly cost in terms of taxes and costs. Let us know how it is in your country.

We often write about value for money and when you ally this to lifestyle then Valencia gives you the whole package. Take a look below at some of our other articles and if you like any of them feel free to share them liberally on social networks. And of course, if you have any questions about taxes on purchase and ongoing costs in Valencia just shoot us a mail.