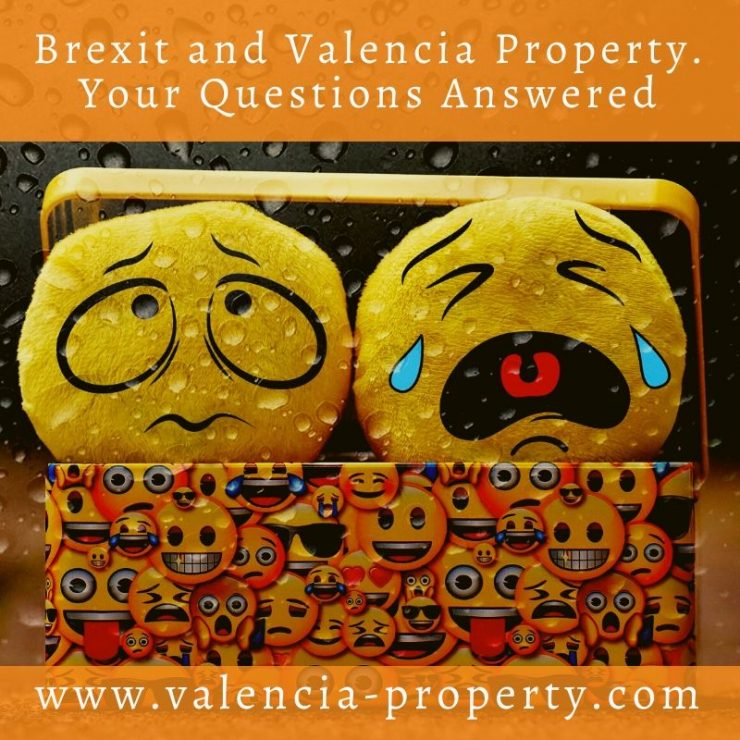 This is a difficult article to write. It’s not difficult from a technical point of view, that’s easy, it’s a totally emotional thing. Especially when it affects me and my family personally. Writing about something that should never have even been a consideration for British people who have wanted to exercise their right to live, work and reside in another EU state was not even on the radar a few years ago. Then the simpleton Cameron devised an ill thought out and badly worded referendum and the charlatan liar Pinocchio Johnson is now putting the result of that flawed and Russian influenced referendum into place after his victory in last week’s election where 88% of the Conservatives messages were found to be misleading. And yes these are salty and bitter comments so if you don’t like them stop reading because there will be more. At least I am refraining from my usual expletive laden conversation when talking about these goons at least until the end, see below.

We have spoken on these pages before about Brexit (Here is a search for all of our articles mentioning it) but there are practicalities now which require a new article as the UK will be out of the EU by 31st January 2020). The question today is what that means for British people wanting to buy property in Valencia and Spain?

Can I Buy Property in Valencia As A UK Citizen?

The answer to this question is a resounding yes. You have the right to own a property in the same purchasing conditions as any other person on the planet regardless of nationality or pathetic government that has taken away other rights you had before.

What Is The Implementation Period and How Does it Affect Me?

After leaving the EU on the 31st January 2020 then the UK and Europe head into an implementation or transition period which currently takes us to the 31st December 2020. All of your current rights as an EU citizen are protected up to this date. You will still have the right to live, work and reside in another EU country up to the end of this period. Once this date arrives if you are legally resident in the country of your choice (Spain obviously in this case) then you will have the right to remain as long as you satisfy national requirements for non EU citizens.

What this means in practicality is that to make things easier for you it is better that you establish residency in Valencia and Spain well before the end of 2020. If you do then your rights will be protected after that date.

The situation post 2020 is, as they say, fluid. It will depend on how the Spanish government, which may have changed two or three times between now and then, decides to treat people from the UK. If the UK government treats Spanish citizens badly then expect reciprocation. However the previous Spanish government has made noises suggesting that they will be extremely well disposed towards those people who are already here and also for people who want to move here.

Expect to be asked for the same requirements as any other citizen of a third country such as the USA or Canada when coming to Spain to reside. Third country citizens initially apply for a year’s residency, and then typically 2 years, two years, five years and finally permanent residency. It’s a hassle compared with the rights that you currently have and that your UK government is taking away from you but it’s possible.

In order to be granted this residency you have to satisfy certain criteria. You must prove that you are able to support yourself financially, you must have private health insurance so as not to be a drain on the State Health Service, you need a criminal records check from your home country, academic or professional qualifications where applicable, job contract or offer, and maybe a long etcetera depending on the case.

There are a couple of options and possibilities here. The first option is as previously mentioned in the last paragraph, eventual permanent residency through the process above. The other option that will probably apply to British citizens, as it does to other nationalities, is the Golden Visa. This is granted to those spending over 500k Euros on property or properties and is automatically granted upon proof of purchase (Deeds). We think that previous purchases will be included in the Golden Visa process so if you already have a property you will be able to use that as a part of the price you pay for getting the Golden Visa. Read our articles about the Golden Visa to understand what it is and how it is useful here and here.

What About Buying a Holiday Home Not Permanent Residency?

No problem. If you want a holiday home in Valencia then you will be allowed to use it for up to 183 days in any given year without having to apply for residency. When it is not being used you will of course have the option to rent it to others. Remember if you do this you will be earning money in Spain and will therefore be expected to do a tax declaration of Spanish income for non residents.

If you eventually decide that you want to use it for a longer time then you will have to become resident through the process described above.

What If I Am A Pensioner?

Your pension can be brought into Spain and currently there are no plans for double taxation just as is the current situation. The main issue for UK pensioners wanting to reside permanently in Spain in the future will be the issue of health care. You will need to have private health insurance for the duration of your residency unless you have permanent residency or citizenship granted and this may be quite expensive for pensioners and get more expensive every year as you get older. However, if you are paying into the Spanish social security system then you will be covered. See our worst case scenario article here.

Can I Get Spanish Citizenship?

After ten years residing legally in Spain you can get Spanish citizenship. This requires a long process and exams so start learning Spanish to a decent level and also make sure to start studying certain aspects of Spain culturally. If you have been here for ten years then normally your Spanish level should be of a standard to pass. Culturally there are online tests available, why not take one and check you mark?

Can I Work in Valencia?

It will be more difficult for companies to employ you as a British citizen rather than a citizen of any of the other 27 EU countries post Brexit. The employer will have to prove that somebody from those 27 countries cannot do the job to the level that you could due to special skills, lack of suitable candidates etc…

However, if you are legally resident then you can set up a business, work freelance or self employed or act as a director of a company just like anyone else (Unless you have the non lucrative visa)

Can I Move To Other Countries Once I Have Residency?

Permanently no, you would need to satisfy that particular country’s residency requirements. In theory as a UK citizen legally resident in Spain you would also have to notify any other EU country you travel to as to your stay there, for example if you drive to France from Spain there are no border controls as they are part of the Schengen area. However, if you do not notify the authorities of your visit then if something happens and you have to speak to the Police or authorities you will be asked what right you have to be there as you will have lost your free movement rights. You will need travel and health insurance unless you are allowed a Spanish European health card for which you require residency. This is difficult to enforce of course.

We are sure there are many many more other questions that you as a British citizen will have about your potential situation here in Spain. If you have one then just contact us via mail and we will endeavour to answer them and we may even include them in this post so it is useful for others because if you have a question then others will too.

For a change today we won’t put any further reading below just click on the article links to learn more. However if you think this article is useful for you and anyone you know who may have questions regarding the situation for British citizens post Brexit then feel free to share this in Facebook groups, on Twitter and anywhere else you think people will see it. And just allow me to say one thing to finish. Your government is run by a bunch of…