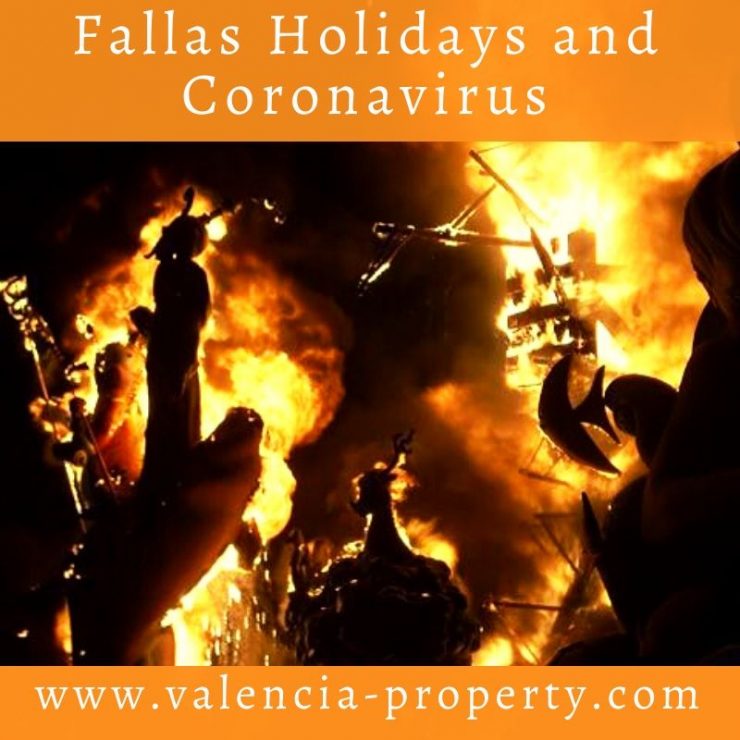 FALLAS IS NOW CALLED OFF. IT WILL PROBABLY HAPPEN LATER THIS YEAR AND OF COURSE HAPPENS EVERY YEAR BETWEEN THE 15TH AND 19TH OF MARCH.

There is a strange feeling in the city today but the vast majority of people know that this is the correct and most sensible decision as over 1 million people converge on the city including over 20,000 Italians from one of the major problematic countries for the Coronavirus.

Italy is closed, New York has declared a state of emergency and Valencia… well Valencia has decided that there is no reason to cancel the Fallas fiestas and they will continue apace. (UPDATE: A meeting is currently ongoing and at 8pm today an announcement will be made regarding the Fallas fiestas) Some call it a sure way to make Valencia a focus for the virus, others say people are going to meet and transmit it anyway. The local health authorities met with the mayor yesterday and advised that there was no reason to cancel Fallas. We’ll see.

Yes, life goes on as normal in Valencia. It always does.

However, we here at Valencia Property are effectively closed from Friday for the next week. The Fallas fiestas fall at a “good” time this year for kids and teachers meaning they get a whole week off school. This means that many Valencians will be going away from the mayhem that envelops the city during Fallas (If they are allowed to get anywhere). They miss things like this of course, (worth watching the last couple of minutes) below …

And this (Again watch the last minute or so)…

But Valencians have seen this madness many times before.

Personally I am going to the UK as my father has an operation next week and I am there to help out (Update: Father’s operation postponed until May or June due to pressures on hospitals in the UK – NHS of course. Therefore I will be around Valencia it seems). We have a lot of clients this week and plenty of potential clients next week but it is almost impossible to navigate the city during the Fallas fiestas and getting into properties during Fallas is nigh on impossible with the owners being away, agencies closing down for the duration and people generally staying up all night and trying to catch 40 winks during the day. They don’t want agents turning up with bleary eyed clients who are more on holiday rather than looking for a property to buy.

Now it may well be that the Fallas celebrations are cancelled, the situation is, let’s say, “fluid” at the moment and with Madrid having yesterday closed schools down for the next two weeks and Fallas being an opportune time to do the same in Valencia either side of the fiestas I can foresee this may happen here too.

Consider that the Fallas fiestas in Valencia are almost sacred though. Valencia are playing against Atalanta behind closed doors this week (They lost 3-4) but that is more to do with what is happening in Italy rather than here we are told. Levante’s game at the weekend went ahead with 17000 fans attending in the afternoon sun but now the next two match days in the Spanish league will be played behind closed doors. (Update: in fact they may be cancelled altogether until a later date).

However, a few pointers for you if you are coming to Valencia in the next few days:

Listen to the experts not to idiots like Trump and conspiracy theories that abound on Facebook. Wash your hands regularly and avoid large indoor gatherings. Greet your friends and those you see out with a smile and maybe an elbow bump or blown kisses rather than handshakes and two kisses which is much more common here. Keep direct contact with older, infirm or generally ill people to a minimum in case you are unwittingly carrying the virus and take the correct precautions when seeing them. Coronavirus might just mean a heavy flu or just some coughing and sweating for you but it could kill an ill or elderly friend or relative.

And keep your friends close (Just not too close) Help each other out if someone if self-isolating because they have the virus; do their shopping, keep them supplied, wear a mask and wash your hands yet again.

And if you are going to be here in Valencia enjoy Fallas or enjoy the city if Fallas is off. Bars, restaurants and cafes will need your support if the Fallas fiestas are affected as it’s their big sales time of the year.

Meanwhile, if you require more reading about Valencia click on the images below and if you think it’s now time to join us here, then feel free to contact us.