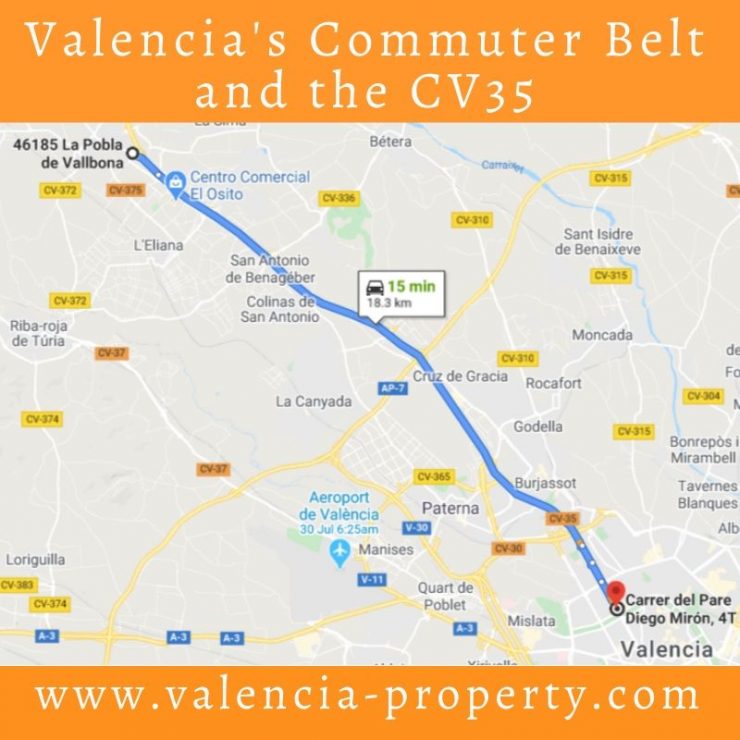 The further you get away from Valencia the less likely it is that you will travel into work from your home. That’s true most anywhere but traditionally it’s especially true in Valencia where people preferred to be as close to their place of work as possible to avoid the need for having a car in the city.

I have now lived here for over 20 years and things have changed, not remarkably so, but things have definitely changed.

I live in La Pobla de Vallbona, it’s to the North West of the city just 18km out from the city and it’s an easy drive or bus journey into the city. Usually I can be where I want to be in the city in 20-25 minutes from leaving my door as you can see on the map in the main image and below it’s about fifteen minutes into the riverbed.

In the past this would be unthinkable for Valencians. I remember when we first came here in the late 90s and Valencians were horrified that we were thinking of buying in Lliria as it was sooooooo far away (22km is a long way apparently). However, since I moved here the population of La Pobla de Vallbona has essentially doubled.

The CV35 is the main road into Valencia from all of these towns. In 2000 it was single lane from La Pobla to Lliria and beyond. This has now been changed to dual carriageway all the way to Casinos and has increased the speed of connection into the city. Work is now being done to make it a three lane motorway all the way to Lliria.

Due to the type of building that has gone on in these towns the CV35 is known in certain circles as the “Ruta del Adosado” (The Route of the Terraced House) The name is a play on words as Valencia was known in the late 20th century and early 21st as the “Ruta del Bacalao“, essentially the House Music Route where every weekend clubbers would descend on Valencia from Madrid to go clubbing in Spook, Bananas, Chocolate and many other house music clubs. Valencia was the home of Ecstasy fuelled weekends and plenty of huge car crashes both on the way down from Madrid and on the way back.

Anyway, back to the “Ruta del Adosado”.

Most of the development in Betera, San Antonio and La Pobla de Vallbona was of semi detached properties and terraced properties, many of which were squarely aimed at young families with children. The idea of common areas with sports facilities, gardens and pools was big.

La Eliana and La Cañada had smaller population growth as they had already established areas with villas with large gardens and the local planning restrictions meant that it was more difficult to get permits for semi detached and terraced houses with their smaller plot sizes. Because of this the population of the first three towns exploded while the population of the latter two increased steadily but not explosively.

Once people started to move into these areas it was found that there was more traffic in the mornings and evenings into and out of the city requiring the CV35 to be expanded to allow for more traffic. Allied to this there was a big growth in the Technology Park and jobs offered there meaning lots of these young professionals took their cars each morning from these towns to Paterna on the road into Valencia just before getting to the A7 motorway.

As a result the young families attracted by the Ruta del Adosado saw the possibility of getting much more for your money in property while living within half an hour of their workplace, city prices being higher than prices in the towns served by the commuter belt road of the CV35. They also saw excellent educational options, plenty of leisure facilities (All towns have excellent sports facilities), cafes, parks, green spaces and more.

Still until this year the majority of the working age population wanted to live close to their work in the City of Valencia itself. They wanted to be near to the Riverbed Park, or near to the Central Market so they don’t need a private car for anything. However that majority had reduced in number and many people had started to buy along the CV35 for easy connection in and out of the city.

And then Covid19 arrived…

Everyone in Spain was sent home and told to stay home. Those who had chosen to live in the towns outside Valencia were happier it seems as they had outside space to enjoy during lockdown, they had a garden or facilities to do exercise, they had terraces to enjoy. When they went out for their daily hour long exercise, once total lockdown was lifted, they could walk through tree lined avenues and easily get into fields and the countryside.

Those in the city largely had little or no outside space, maybe a balcony to view the street, maybe just even a large window looking at another block of apartments across the road. Many of the apartments they were living in were north facing so they got no daily sun and city apartments were smaller than houses outside the city meaning they couldn’t find a place to do their work at the same time as their kids were studying. A 60m2 flat with two kids was not ideal for four people for 8 weeks without going out.

Suddenly the local housing market changed. Demand exploded in the month since lockdown ended and visits to houses were allowed again. The trend was clear, move out of the city and to a place where you get bigger properties for the same amount of money. However, the other trend is that now Valencians who previously used the street as their outside space, meeting friends at their local bars and cafes and going to restaurants to socialise have now also discovered the value of terraces in their city properties, so demand for those has increased massively and there are even price wars above asking price at times for prime property in the city with terraces.

Sanity is likely to return to the city market soon once the economic consequences of the pandemic start to hit, probably in the autumn but until then apartments with terraces are in huge demand and houses with gardens and pools even more so.

Keep your eye out.

And if you found this post useful or illuminating read more about Valencia and the company below.