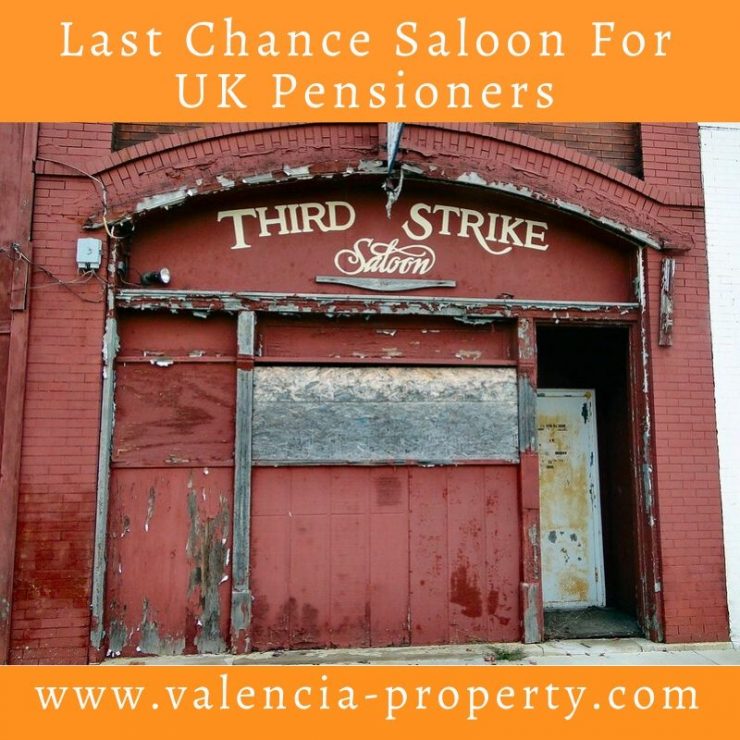 Finally, what has been an open secret for a while seems to have been confirmed by the UK government. After the end of this year new arrivals into Spain will not be covered by a reciprocal agreement for healthcare.

As reported in Europe Street News (click on the image above for the link) once the transition period is over on the 31st of December of this year UK pensioners will not be covered by healthcare in Spain if they move here permanently and become resident. And if you say this is fake news then just mull over the official paperwork supplied by the UK government here. (I’ll wait for you to come back exhausted and depressed after reading all of that)

Pensioners and others will still benefit from the EHIC for a period of up to two years if they are not considered residents in Spain but it will mean that in order to reside in Spain UK pensioners will be forced to show that they have sufficient private health insurance as part of the criteria for being granted residency just like other third country nationals do currently. As stated in the article this is a huge opportunity for insurance companies! (That is sick) It’s also a huge problem for UK pensioners wanting to move to Spain as they will be over a barrel regarding payments for insurance and the worst part is that the older they get, the more expensive their cover will get.

I got an online quote as if I were a Canadian citizen of 70 years old coming to live in Spain to get an idea of the costs involved. See below. Various plans available but prices from $387 Per Month. Compare that to the cost if you establish residency before the end of the year, €0 per month, and you get an idea of the difference.

There is another way of course, a worst case scenario if you like, you work! (we have written about this before here) However you need the right to work in Spain which will not be automatic for British people. If you work you pay into the system but there is a problem with this, to have the right to live and work here you will need private health insurance! Chicken and egg! You may be able to pay private health insurance to get the right to live and work here and then start working but… you see where I am going here!

Best to get over here now…

Well, the state pension is the only benefit that they will retain on moving abroad after the transition period ends. Other benefits will not be available to them after the end of transition. This means things such as winter fuel payments etc… will no longer be paid as the UK government abandons its responsibilities to its citizens who may well have worked their whole life with the aim of retiring abroad on their pension for a cheaper way of life.

The truth is that the UK government are mental. This could have been something they could have presented as an easy win for them because the average cost of healthcare for UK pensioners who move to Spain was considerably lower for them to pay back than the cost they have to pay out in pensions and other benefits along with healthcare costs if the pensioner stays in the UK.

The “Convenio Especial” To The Rescue?

However, there is one chance for British pensioners, the same as pensioners of other nationalities, especially those aged over 75 for whom getting private health insurance will be either prohibitively expensive or impossible, the “Convenio Especial”.

This system means that after twelve (Edited) months of residency (And being on the Padrón) you can start paying into the Spanish social security system and be covered for all of your healthcare needs. It is not cheap, costing 157 Euros per month for over 65s (Edited) but it will mean that all healthcare issues are covered by the excellent Spanish national health care system. Even if you managed to get private healthcare then you should expect preexisting conditions and long term care to be excluded. You will have to pay for prescriptions under the convenio especial between the full amount and 50% of the cost of the medicine, but your basic care is covered.

Lockdown is over for now and summer is here. Effectively you have six months to establish residency in Spain in order not to be caught out by the new restrictions on your freedom of movement. As a UK pensioner if you want to move to Spain and to continue to enjoy the benefits of one of the best healthcare systems in the World, free at the point of use, you really need to get to Spain as soon as possible and find your place to live. You need to have your residency established before the end of the year and because of Covid19 and the lockdown there is a backlog.

Do not even think of doing this yourself now you will need a lawyer who knows how to navigate the system as quickly and proficiently as possible. They have appointments ready to be filled by their clients. Obviously we know the most efficient ones to give you that recommendation if required.

Late Addition and Adding Up

And this is important, to be granted residency you will need to have a bank account here with an average of 11000 euros in the account over the previous three month period per person applying. Therefore if you apply for residency a month after opening your account you will need to have deposited 33000 Euros in the account on that first day to have the average in the previous three months or 66000 for a couple. This is why it is important to start asap! Once done it can be taken out or deposited elsewhere again but on application you need proof of being able to support yourself.

And you need to start the process as soon as possible. There is a change in the system from next month regarding NIE numbers that we will write about as soon as we have full details.

If you are a UK pensioner thinking of coming to Spain and want a consultancy call to elaborate your own escape plan contact us as soon as possible. You can see more about our consultation calls here. We look forward to helping you. As we have said before we have Brexit refugees, Trump refugees and even Catalan refugees so we are used to dealing with your issues.

Click on the images below for our related posts.