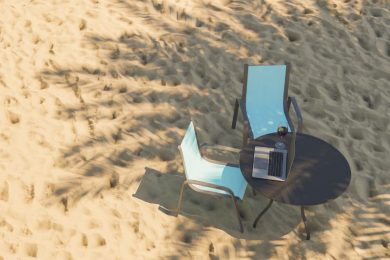 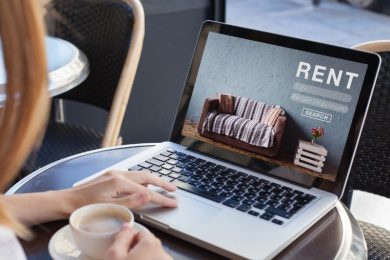 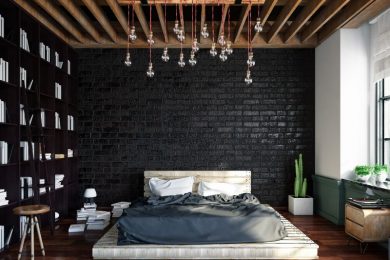 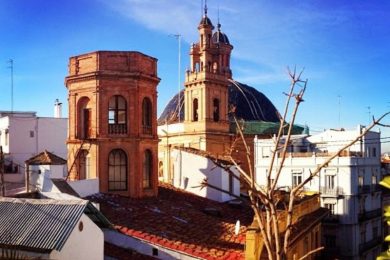 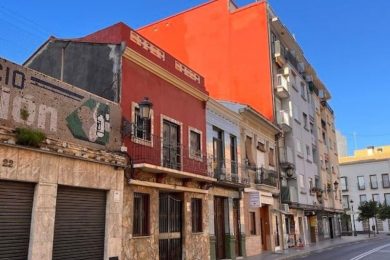 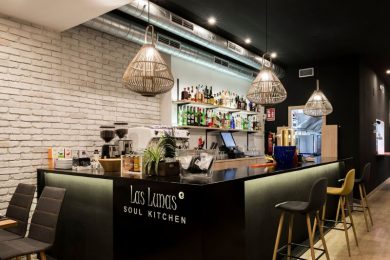 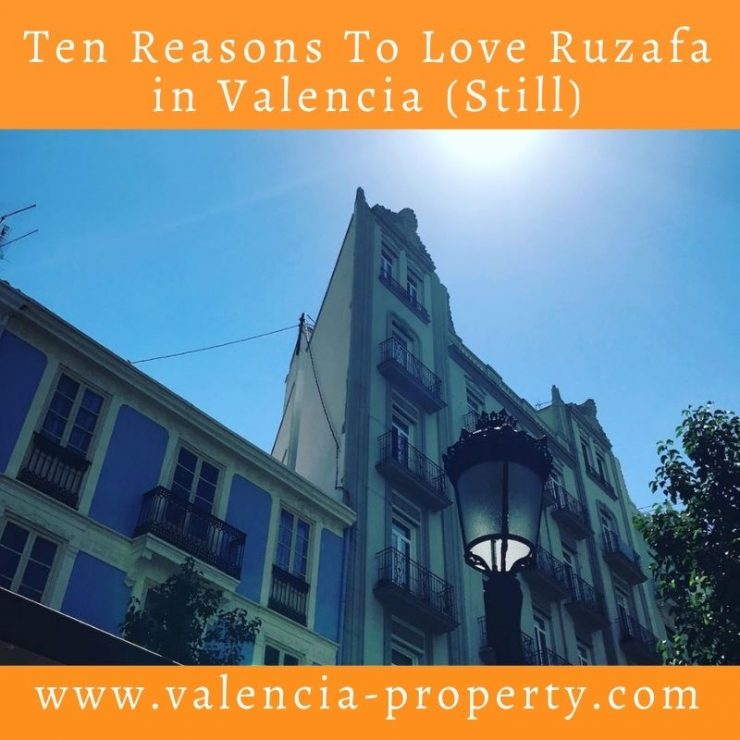 Described by many as Valencia’s bohemian heart, by others as Valencia’s Soho and by East Coast Americans as Valencia’s Greenwich village, Ruzafa has long been on our radar as a great place to live due to its proximity to the centre of Valencia, the vibe of the area and the classical facades amongst other reasons. However there are others who describe it as overhyped, too noisy and a bit grotty. Of course the truth lies somewhere in between but on a scale you would get closer to the former descriptions rather than the latter. Today we are going to explore some of those reasons.

Ruzafa used to be a bit of a red light area and the closer you got to the railway tracks and station the grottier it became. Nothing could be further from the truth these days. The only grotty part left, a single block near the Ruzafa Market, has this week been listed for rehabilitation by the council in their efforts to make the whole of the city even more liveable than it already is. As you walk or cycle around Ruzafa you hear the sounds of rehabilitation of buildings and see the results all around you with newly painted or restored facades everywhere. Complementing the fresher look of the neighbourhood we still love Ruzafa for so many reasons, take a look at some below.

You won’t find a Zara in Ruzafa, you won’t find Springfield, H+M, Primark or any other big brand shops. You are near to them, Calle Colón for those wanting to know, but you haven’t got them sucking in thousands of people every day and ignoring everything around them. Almost every shop in Ruzafa, apart from a few supermarkets and cafes (100 Montaditos and a few others) is independently owned. This means you can shop till you drop in a wide variety of shops without ever filling the pockets of Jeff Bezos, Amancio Ortega or any other charisma lacking sociopathic billionaire you may care to name. Spread the spending and spread the love 😉

And speaking of which… there are more Vintage Shops in Ruzafa than you can shake a stick at. If what you want is a pair of original ripped jeans from 1960s Texas you have probably got more chance of finding them in Ruzafa than in the States as all old clothes from America seem to have been imported by weight into Ruzafa, and in some shops you can buy them by weight too. Shops like Trinity Vintage will see you right.

Craft Beer and Bodegas in Ruzafa

Because, of course there are craft beer bars and shops, this is hipster central. But there are also old style bodegas where they can guide you to the best buys in wine and encourage you to do tastings with them. Want to brew your own? There are plenty of places to buy your kit. Want to get off your head on strong hoppy and hippy beers? Then you can also find plenty of places to do that. Want to drink Amstel and Cruzcampo…? Well, you can do that too but expect to be looked down upon by the people passing by you on their electric scooters showing off their ankles in their skinny jeans that don’t quite reach their feet.

The little brother to the large Central Market in Valencia, Ruzafa market is a food market with great prices, a superb central position, and a great selection of foods. There are even specialist delicatessen sections and stalls dedicated to Asian and Mexican foods as well as coffee roasters and cycle repair shops, because of course there are cycle repair shops, this is Ruzafa… speaking of which…

Valencia is a paradise for cyclists as we have said many times before. The network of bike lanes is huge and growing, snaking through the city. Most of the current roadworks in Valencia city are because they are reducing the width of roads for cars and increasing them for public transport and bike lanes. Traffic through the main streets of Valencia has dropped over 30% in the last two years as they get reduced to one lane for cars, one for bikes and one for public transport. More and more people are using their own bikes or electric scooters and leaving the car at home.

The New Central Park, we are still calling it new, has been around for a while now and the plants and trees are growing and providing more and more shady areas to enjoy on hot sunny days. There is plenty to do there for kids, teenagers and grown ups alike. The best thing though is that it now forms and integral part of the district of Ruzafa and this is due to be added to in the next year with the redevelopment of the Plaza de Manuel Granero just off Calle Cuba to increase the greenery in the area still more. An added bonus is that Malilla district is now linked to Ruzafa through the park which was previously a bit cut off by the flyover and roads.

Finally, more than ten years after it was excavated where urban explorers have made Youtube videos on dinghies going though the flooded remains, the metro line under Ruzafa linking the central market with Nazaret and the City of Arts and sciences will be finished this year for opening in 2022. One downside of Ruzafa previously was that there was no metro line and so despite all of the bus routes and bike lanes you couldn’t just hop onto a metro or tram and get around the city, you needed to walk a whole five minutes to the centre. Well now you can. And if you want to take a look at what it looked like with water…

Ruzafa is a sort of Pizza shape (or like the spaceship in Asteroids for those of a certain vintage) and the end of Matias Perrelló almost reaches the riverbed near the city of Arts and Sciences and the Gulliver Park. So it is bounded by parks with the central park at one end and the riverbed at the other. This gives you ample time to warm up as you head down to the riverbed for your daily, exercise either walking, cycling, running or attending one of the outdoor fitness sessions you can find down there. And of course at one end of the riverbed you have another park, the Parque de Cabecera, and at the other you have the Marina and beach. I call that a nice bike ride.

Facades and Colours in Ruzafa

On our homepage there is always a picture of Ruzafa because in the Favourite Towns section we have an image of the typical facades of Ruzafa, see below. The coolour, design and general coolness of Ruzafa runs throughout the neighbourhood with plenty of different coloured buldings lining the roads with ornate facades in various states of upkeep. It’s a constantly changing image though as different buildings get their latest paint job and many times they change the colour to something more appealing than just plain old white.

You can find any number of different types of Cafes and Bars in Ruzafa from high end pastry and cake shops such as Dulce de Leche and La Más Bonita to the greasiest spoon “Greasy Spoon cafe” you could possibly imagine, passing through Vegan, Mexican, Michelin Starred and more. You won’t have a favourite cafe in Ruzafa because by exploring it will change every month. And now they are opening up again and most of them now have large outside terraces you get to enjoy them even more.

Apartments in Ruzafa are the most common sales. Most Ruzafa apartments are somewhere between 70-100m2 with two or three bedrooms. There are larger properties available on Calle Filipinas overlooking the Central Park and along the Gran Via towards the riverbed but mostly you get medium sized apartments. Terraces are rare except on the first and top floors and in many blocks the terrace at the top is a common one for the Community, see our article about the community here. Let’s look at a few current offers in Ruzafa. Let’s go from low to higher priced properties.

A very quick listing and more photos are on the way but if your budget is limited and your heart is set on Ruzafa this cute little Loft in a pretty building might suit you perfectly.

Nicely put together, sold as is and ready to move in just 50 Metres from the market, perfect for short stays or find a tenant and rent it out for 500/600PCM, not a bad return, and ideal if you’re looking to top up your Golden Visa

Here we have a great apartment in Ruzafa, perfect for the movers and shakers who want to be central but need some outside space and an ideal pied-a-terre or investment in the most fashionable area of Valencia city.

2 Bedrooms, 1 Bathroom, an Independent Kitchen crying out to be opened up to the living room and the holy grail of a fantastic terrace bathed in evening sunshine all set behind a classic 1930s facade thats soon to be renovated (all paid for by the current owner)

Totally furnished (too much furniture actually) and ready to go, another great Valencia Property.

1975, a good vintage for wines, less so for buildings in Valencia but if you don’t really care about all that “Look at my facade” stuff then this apartment is definitely worth a viewing.

It’s rare indeed to find a large apartment in Ruzafa, but this property on Centelles is an impressive 150m2 and whilst needing some updating has enormous potential and with careful redistribution will be a fantastic investment.

This 5 bedrooms, 2 Bathrooms, Kitchen, reception area and Living Room is crying out to have some walls knocked down and receive some love and attention, a stones throw to Central Park it also has clear views from the rear to another park and provides plenty of light and cross ventilation. There is a garage space available in the building and its ideally located for the BSV School. Recently reduced in price and despite this I think there’s still some room for negotiation, so come along, take a look and tell us how much you’d like to pay to live in Valencia’s Soho

Here we have a wonderful apartment on Gran Via Marques del Turia with one of the nicest renovations I’ve seen for quite a long time, the owner has really created something special using the very best materials and an excellent eye for detail in a classic period building. This is magazine cover material so I’m going to shut up for once and let the pictures do the talking.

For More Listings Check Out Our Valencia City Homepage

And if you liked this then maybe read a little more… Just click on the images to be taken to the pages.