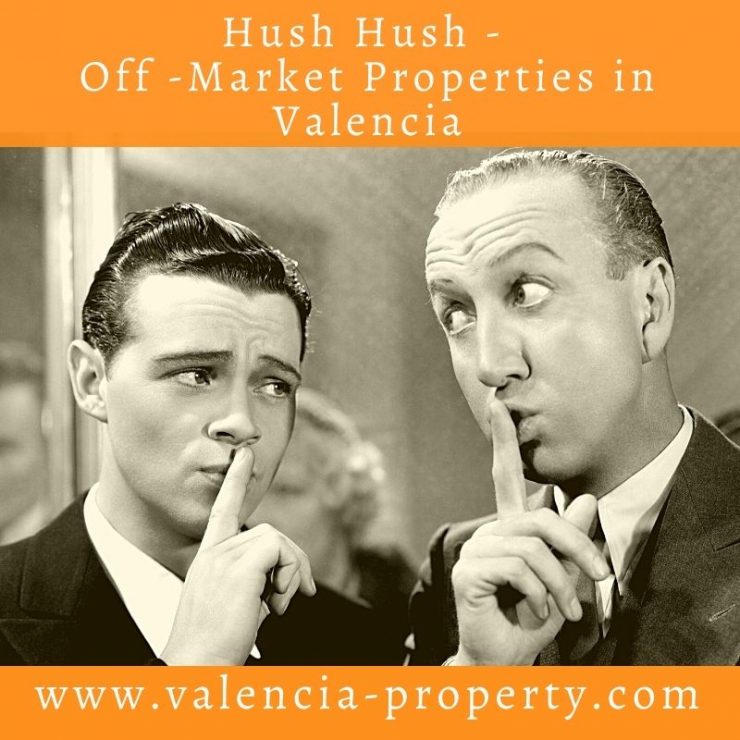 We publish a lot of properties on our website of all styles, sizes, shapes and prices. We get offered a lot more which we don’t publish for a variety of reasons but mostly to do with price or location either being wrong or there not being demand for that type of property. However, we also have a lot of properties that are off market but, well, they are still on sale, sort of… a bit. This is why it is always better to message us with your requirements because you may like the properties we have on the site, after all they are the selection of the best current properties for sale, but we may also have something that suits you down to the ground but it may not be published by us and in this post we will tell you why.

There are a multitude of reasons why we might not publish a property for sale even though it is excellent but they generally boil down to the reticence of the owner to publish due to a lack of understanding of the market and how it works and restrictions on the sale. Secrecy and privacy and paramount at times and we are not only talking about properties at the top end of the market but also at times for the cheapest properties.

Luckily we still have access to many off-market properties and today we will show you the many reasons why owners may not want to list their properties on or offline. We can still take you to see them usually as that is what we do, we find the best deals for you, but you may never see them published online or off.

The first reason we are given is that the owners don’t want their neighbours to know the property is for sale. This one has always fascinated me because it leads to two possible reasons. Firstly, my website is so popular that everyone in the World and their brother has it bookmarked and with notifications for when a new property appears and, however much I feel it should be that way, reality has intervened many times to prove that this is not the case. Secondly that there is a deep well of suspicion between all of the neighbours living nearby and that means we should probably be checking under the newly laid patio for dead bodies before selling the property.

In a sane world owners would know that they are much more likely to find a buyer from their neighbours as, especially in Spain, families like to be close and if the mum has her son or daughter living next door then so much the better. However long I live I will never understand this one.

In the city or deep into the countryside it is common to hear that the owner doesn’t want to advertise the fact that the property is empty so that squatters or thieves don’t move in and take all of their stuff. Just a couple of points here. Many times we actually struggle to give away stuff to charity from people’s houses because and I quote from the charity’s mouth “There is nothing in there which is of any use to us“. Secondly I go back to my last paragraph, does everyone think that my website is the Amazon or Facebook of Valencia Property web pages? We get a lot of visits but not everyone is scanning our pages looking for a place to squat.

Not Wanting to “Burn” The Property Out

Some owners are terrified of having their properties online for too long. Sometimes they consider a week too long as the property might get burnt out! They seem to think that nobody is going to buy a property after the first few weeks of it being advertised. Nothing could be further from the truth but why let facts get in the way of some good old fashioned feelings.

Owners, your property will not get burnt out, simples.

The owner sends us the photos and to put it bluntly they are shockingly bad and would shame a 19th century Victorian producing a daguerrotype. They don’t want us to come round to take better photos, produce a video, do 360º photos and plans and even take drone footage. They don’t seem to want their place professionally presented. Often they think it is enough to provide us with four photos and those photos are always of an open toilet, a living room with the blinds down, a front door (although we never know if it’s their front door) and for some reason an obscure corner of a room with no redeeming features, a white void.

This is a particularly strange one. There is an inheritance and one of the siblings doesn’t get on with their brother and sister perhaps. The sister has taken the photos but she has given them to another agent who she is friends with and that agency wants an exclusive marketing agreement on the property but the two other children don’t agree. They then come to a cobbled together agreement that all parties can sell it through their preferred agents but suddenly the keys are “somewhere” and it is difficult to get access.

We have seen it all, heard it all and been there done that! We’ll just take people round if we think the property suits a client.

They Don’t Want To Be Bothered

We don’t have a real MLS (Multi Listing System) here in Spain like in the USA. Therefore as soon as an agent starts advertising a property the owner is immediately bothered by other agents who recognise the property knocking on their door, posting ads and generally being a pain in the backside. Many owners, especially if they live at the house, don’t want to be bothered so they ask the agents not to publish the property but to “keep it in mind” Here’s one secret for owners to learn right now, agents will not keep your house in mind if it is not published and listed because they are simply too busy with requests to view the properties that are listed, with photos and details, or that they have just visited that day, yes, we have goldfish retention spans.

An owner telling an agent to keep a property in mind is like a parent telling their teenage kids to remember to water the plants, feed the pet or do the dishwasher without arguing about it. It’s just something that is never going to happen.

This is another one that flummoxes me… The owner doesn’t want to publish it online because they only want really interested parties to visit it. Again two questions and they are both chicken and egg situations; How can anybody be interested if they have never seen it before? How do they expect someone to know whether they are a really interested party without having visited it or even seen the photos?

“We want to sell but we don’t want to publish photos because that might bring people to the property who are carriers of Covid” Now this was a new mind bending way of describing to us why we couldn’t publish a property. It seems strange that we are allowed to bring people to see the property if we have interested parties but that those people would be a lot more prone to carrying Covid if they had seen the photos online at some stage. It takes a special kind of paranoia to come to that conclusion

I love this one. “We signed an exclusivity agreement with an agent last year and they haven’t brought anyone to see it” (No sh*t Sherlock) “You can show it but you can’t sell it until the exclusivity agreement runs out in late 2026 otherwise I have to pay them 20k” And yes, we have sold properties and signed an agreement to sell after that lock up period ended.

“You Can Publish It But Only Outside Spain”

I have heard of the Great Firewall of China but never the Great Pyrenean Firewall. Yes, we publish on our site and we advertise on sites outside of Spain but we cannot stop someone in Spain from accessing those sites. The internet is a little bit international you know! We give you a window to the World on the Valencia Property website, that much is true, but we cannot pull the blinds down on your neighbours.

Agents Not Wanting Competition Where They Advertise

I actually get this one. If an agent has a property on their site and they are advertising it on the Spanish portals they don’t want other agents putting the same property on there, diluting the effectiveness of the ad. There you go, I get that one despite the fact that we don’t advertise on Spanish portals currently. However, that agent may only be paying each portal for ten properties and it may appear and disappear every day meaning you don’t get to see it.

I fail to understand many things in life, the popularity of right wing politics amongst those most badly affected by right wing policies, nationalism as opposed to internationalism and why anyone would want to wear a pair of crocs (and even worse, crocs with socks), but the reticence of Spanish property owners to make the most of their property when selling is what amazes me more than most. I just cannot get my head around this attitude. If you have any suggestions as to why they hold these attitudes then feel free to tell me your theory.

This week we have what is generously described as the Best Penthouse in Valencia. Now honestly I am not sure it is the best as there are plenty of excellent ones around but this one has a few special features; nicely modernised, well furnished, excellent large terrace with access from the kitchen and the living room, great views across the city and that most important feature, photos that are taken on a slope to make you tilt your head in appreciation. Asking price of 750k of your Euros and you can get others tilting their heads in appreciation too.

And If You Liked This Post Then Consider The Following…

Just click on the images below for more information. Some of our earlier posts here about aspects of buying Valencia Property that you may not have realised.