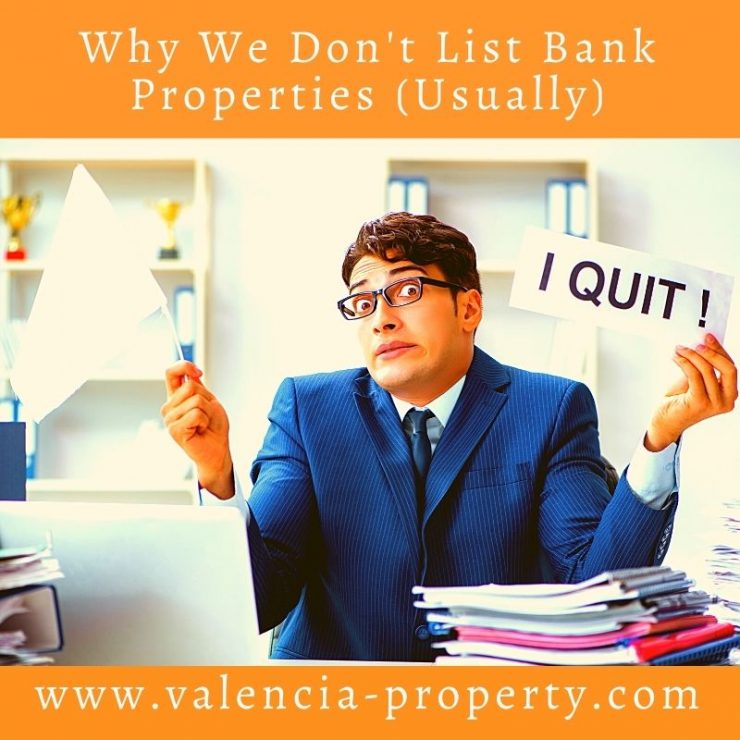 We get this question often “Do you have any bank properties?” The truth is “not usually, no“. “Why not?” Well, there’s a short answer and a long answer to that so let’s go with the long answer and an example property and you may get an idea of why. For those of you who just want the quick answer… well, they are usually a steaming pile of cr*p.

First things first. This is NOT a typical bank property. This was actually a good one and that is why we listed it. You can see the listing here even though we can probably never get in to see it any more. I am leaving the listing there for now so the image appears in this article.

It did, however, have some of the characteristics associated with bank properties. It was…

In order to get the photos and see the property we contacted three agents. Why three? The first two didn’t know where the keys were! The last agents had the keys so they allowed us to take them and go and take photos. What they didn’t tell us was that the bank had installed an ear splitting alarm for when the door was opened that could only be turned off with a code.

The bank hadn’t told them what the code was.

A week later we returned, code in hand along with camera and 360º camera to take the photos. Of course there were windows missing, other bits of vandalism including some wrecked blinds and of course the aforementioned paellero covered in foil from when it had been used as a marijuana growing den. You can see most of those details on the images in the 360 tour below. And we managed to do it without the bleeding from our ears too this time! Result!

We listed it and had lots of interest but as you may have noticed there was a little thing called Covid19 going on so interested people wanted to come and see it but were slightly inconvenienced by not being able to travel. Finally, people were able to travel so we went and got the keys and sold it and everybody lived happily ever after… erm, not so fast…

By now the agent where we had previously picked up the keys no longer worked with the bank because…. well because it’s a pain in the a*** trying to work with banks and you need to provide details of every visit, full details of the clients, what time you did the visit, how you are promoting it etc etc etc… and all for very little commission. And you have to promote all of the bank’s properties however overpriced, run down and generally sh*t they are, not just the odd decent one they have. Basically it’s not worth the hassle for agents to work with banks so banks burn through the agents they work with just like the agencies that are franchises burn through their agents by treating them like disposable assets.

We had a client in the area and he was interested in seeing properties that were similar. We showed it to them from the outside after visiting a property nearby and they loved it. We searched the property again online and found it with three agents, funnily enough three different agents to when we had first looked at it when searching for the keys, go figure!! The first refused to take us and the client because and I quote “How do we know they are going to buy it?”

The second came up with the usual, “Sorry, but we don’t know where the keys are.”

The third was the worst, “What, a foreign client? How can we be sure of where their funds are coming from?” They were suggesting that all foreign clients have illicit funds essentially. Now we don’t suppose they actually think that, we just think that they didn’t want to try and find the keys and go out to a property 30km away from their office because… well just because.

The property was listed online and then suddenly, it’s gone. As far as we understand it’s not sold because we have been round and there is still no signs of life. We think all three agents have just said “Sod this for a game of soldiers!” and delisted it because we asked them again and none of them have sold it. One of them actually denied they had ever actually had it listed even when we showed them a screenshot of the property with their logo from the portal they were advertising on 🙂

So Tell Me Why Don’t You List Bank Properties Again?

You Get The Picture Right?

We could list another load of reasons, of things that have happened, of banks not accepting offers unless they are signed in triplicate with a deposit of 10k in case the offer is accepted, but only if written in red pen on Papyrus made out of the dead sea scrolls…. and if they can actually be bothered to answer your offer by accepting, by making a counter offer or just by having the common decency to say no.

We do list our selection of the best properties currently available in and around Valencia. You can see the latest uploads on our homepage here. We also have access to thousands of other properties through our contacts and yes, some of those contacts are even in banks and they let us know if a decent property is going to be listed and we will go through the frustrating process above if that property is perfect for you. We like pain you see, we love going through pain for the eventual payoff of success.

You can read more about what we do, our listings, and more below. Just click on the images to be taken to our outstanding catalogue of information about property and life in Valencia but just remember one thing…