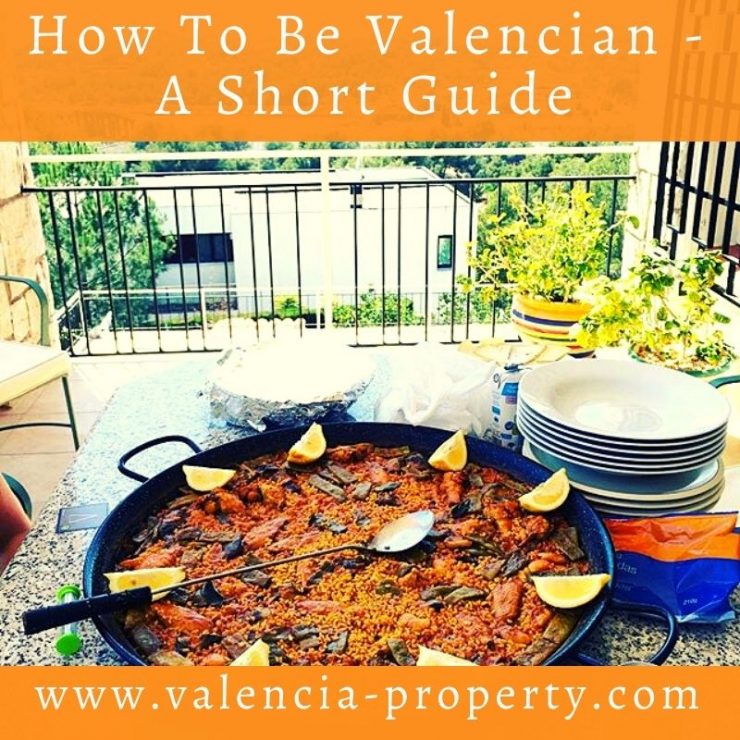 We are often asked about living in Valencia, about how it’s different and about what you need to do to fit in. It’s a precursor to moving to Valencia for many people. They want to know what life is like here and how they can become a part of that “scene“. First thing it’s difficult. “Being Valencian” requires much more than just living in Valencia. It’s an attitude, a set of inherited traits and a socialisation in Valencian society.

Now this is a very tongue in cheek piece and of course these are broad generalisations. A lot of these aspects of being Valencian don’t apply to the younger generations coming through and living the city in a different way, but some still do so let’s look at them in turn. By doing each one of the following you will become more Valencian 😉

Be Louder, Much Louder

You may be a low key version of Brian Blessed in your everyday life but that is not enough. You need to turn the volume up to 11 because if not you will go unheard. Valencia is loud and Valencians are loud. They have to be in order to be heard above the noise of the fireworks and all of the other Valencians shouting in the cafe to be heard. It’s a sort of self fulfilling prophecy. One of the lines you almost never hear in Valencia is “I’m sorry, could you repeat that as I didn’t hear you!” One of the most common is “Wow, that was loud!”

Believe That There Is Nothing Better Than Paella

It’s rice with things in. Of course it’s a bit more elaborate than that but that’s basically it. It’s not just rice with seafood and in Valencia traditionally it is never rice with seafood. Paella is considered an art so to fit in here you need to become an artist. Some of the most common versions of “Rice with things in” can be seen in this article on the Culture Trip. And if you want some help in learning to cook Paella look no further than Richard Ayoade and Sara Pascoe in Valencia.

As we have said before on these pages Valencia is not a large sprawling city. You can just about get anywhere in the city on a bike in less than half an hour. And people do. Of course people have cars but if you ever manage to find a free parking space it’s likely that you will never move your car ever again if you want to be a true Valencian.

Alternatives to the car abound by walking, bus, metro, Valenbici, Mopeds and E-Scooters. And if you want to feel even more Valencian then make sure you wear sports clothing to stand statue-like on your e-scooter. After doing five kms on it through the network of bike lanes, narrowly avoiding running over errant pedestrians (eg, Me) who don’t hear the low whine of the e-scooter coming their way at high speed, you can then pretend you have been exercising in covering that distance because you are wearing Lycra.

As a Valencian you must have a favourite cafe because that is where you will meet your friends for a coffee and a chat. You won’t make them a coffee in your house, despite your high priced Nespresso machine, because that is not what you do.

You go to the greasy spoon cafe on the corner nearby and sit on the terrace shooting the breeze.

Wherever you live in the city it will be unusual if you don’t have a choice of excellent cafes and bars within a short radius of your apartment and you have to use them all before choosing your favourite or favourites. (You choose more than one in case of the terrace being full one day or if you have a shady summer terrace and a preferred sunny winter terrace)

When Modernising Your House…

Use these tiles. It’s the most Valencian thing you can do

Have A Chip on Your Shoulder About Living Well

The truth is we all know that living in Valencia gives you an excellent quality of life, look at our article here all about the Cost of Living in Valencia as an example. However you really need to develop a chip on your shoulder about it once you live here. You need to let everyone who is not from Valencia know that nowhere can you live quite like in Valencia. This is true even if they live in one of the other great places for quality of life in Spain. People from there are never allowed to convince you that anywhere else may approach the quality of life here and at the same time you must evangelise profusely about the merits of Valencia.

Now this one is counterintuitive because in the previous one we talked about Valencia as a whole. However, within the city and talking with other Valencians you need to become “Barrio snobby”.

“Your neighbourhood (Barrio) is the best even when you know it isn’t.”

You need to find at least ten reasons why your neighbourhood is better than their neighbourhood and why it suits your lifestyle perfectly. Reasons can include proximity to work, public transport, the best selection of cafes and restaurants, the light… let’s face it you could even include it being nearer to the Greenwich Meridian (they don’t have to be factual or rational just something to argue about in loud voices at your favourite cafe)

Retain Opinions About Other Areas of the City Despite Never Visiting

Related to this you must retain your opinion abut other areas of the city even if you have never visited that part of the city for twenty or thirty years. In the past I have heard from apartment owners the following gems:

All of these impressions are totally wrong. All are taken from a lack of lived experience. All were told to me by Valencians of a certain age.

Exercise in the Riverbed

The riverbed is one of Valencia’s gems. You can read more about it here. And it’s something that the Valencians really take ownership of. One of the main things Valencians do here is exercise and you can join them.

You are not a real Valencian if you haven’t jogged, cycled, done yoga, used a personal trainer, played football, rugby, frisbee or even quidditch in the riverbed. Oh, and you must wear Decathlon brand sports clothing too or it doesn’t count.

Act Shocked If Asked To Go Out More Than 400m Away

You will not really be shocked but you may want to pretend you will need to prepare for an Amazonia or Arctic visit if you are asked to meet with someone more than 400m away from your apartment, you may be some time. It’s just a thing that happens.

Remember you have your preferred cafes within a short radius so you see no point of going anywhere else. The same is true of shops and restaurants. The place you go to will never be more than 400m away, 500m at a push. You know the concept of the 15 minute city? That’s the Valencian mindset except here it’s five minutes.

Dress Appropriately For All Occasions and Well For Most

To become Valencian you can no longer just mooch around all day in your favourite comfy joggers and sweatshirt*. When you go out you get dressed for what you are going to do and that usually means dressing to impress or with all the paraphernalia required for the activity.

For example cycling requires more lycra than you see on the average Peloton in the Tour de France, a wedding requires a ridiculously lavish and silky dress and newly coiffeured hair and going to Mercadona to pick up some yoghurts requires a change of clothing and some make up.

*I will never be truly Valencian for this reason alone!

To be Valencian you must recognise that your beach is fantastic, see the section above about living well, and yet you must never ever visit it or even acknowledge that Valencia has a beach you can use for beach activities such as sunbathing, beach volleyball, beach bar drinking or more.

Traditional Valencians lived with their back to the sea as the city developed inland up the river and they never looked back. The sea was the preserve of fishermen and little else. To be truly Valencian you must keep that idea alive. Leave the beach for the young ones and the tourists.

The most Valencian thing you can do is to join the local Fallas association. This combines many loves of the Valencians, loud noises, paella, fireworks and late night parties being major among them. It is also an essential glue that binds communities together through the whole year and is a major cohesive part of Valencian society. Your kids get to see other kids who live in the area outside of the house and various generations are all seen together enjoying each other’s company. They even get their own Fallas association uniform so you recognise those who live around you when out and about. I can’t really be too sarcastic about this as it is a lovely part of living in Valencia and I know loads of people who do it and it becomes a major part of their life.

Do you learn Valencian or Spanish? Well, to become Valencian you need to speak one of them at least and that is usually Spanish. The more you understand in Spanish (Or Valencian) the more you can integrate into Valencian society. The level of English spoken in everyday life is not very high and that’s normal, English is not an official language of the Valencian community of course.

Now the truth is that I don’t speak Valenciano. As I always say to everyone after so many years here I generally understand it but I don’t speak it. I’ve never really had to, everyone speaks Spanish. Truth is I have never forced myself to learn Valenciano because it’s not needed for what I do or my everyday life. This will horrify Valencian maximalists who insist that Valenciano is essential in the modern World. It isn’t. Only one person has ever insisted on speaking Valenciano to me, he did it for years, and that was our old postman. Your kids may need it and learn it in school but you would have to go out of your way to learn Valenciano when you are surrounded by Spanish so most people don’t.

Once you can do all of the above you will probably be advanced enough to consider yourself Valenciano. However there is one thing you need to know, whether the typical Valenciano will consider you Valencian is another matter altogether. Don’t worry about it though, there’s not many traditional Valencianos left.

There is no Golden Visa Property of the Week this week as we have only been uploading lower price properties onto the site. Next week we have a doozy or two coming up though. So wait until then or get yourself a portfolio for your Spanish Golden Visa.

If You Liked This…

Then you may want to read more of our more Tongue in Cheek posts from the blog. Take a look by clicking on the images below to be taken to the articles.