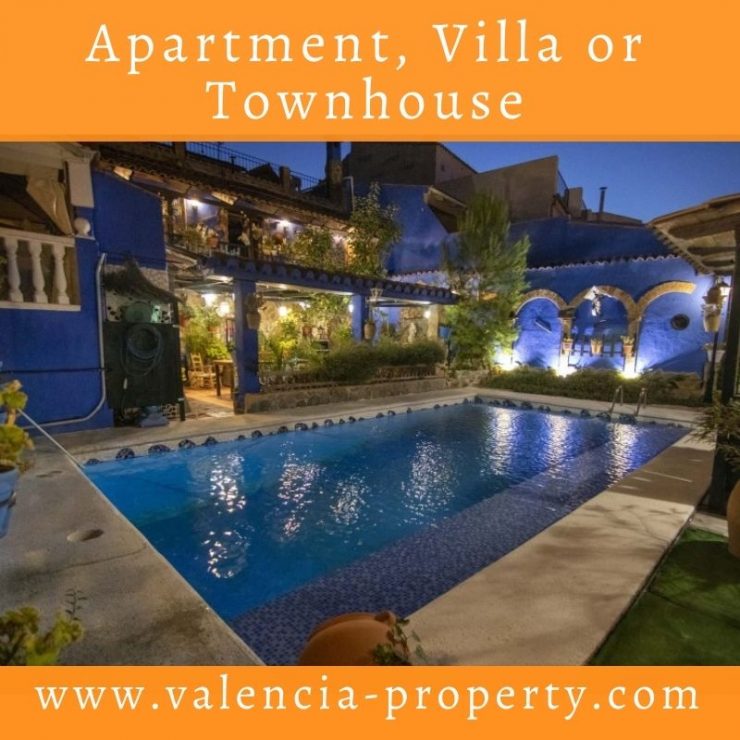 For years we have been pushing the claims of townhouses as alternatives to villas or apartments for living in and around Valencia. Not many people have agreed with us as apartments, especially those in the city, and villas have continued to make up well over 90% of our sales to buyers of property in Valencia.

Could this be changing though?

We are starting to see an uptick of interest in townhouses, especially those with back patios and terraces, and we are also seeing a greater desire to be in one of the villages or towns around Valencia with easy access into the city.

So today we are going to look at the advantages and disadvantages of townhouses compared with apartments and villas. We will be looking into the issues of space, availability, upkeep, location and price and maybe suggesting a few places where you might find a great deal on your townhouse.

Townhouses sit in the middle of apartments and villas as regards space. City apartments are usually the smallest as space in cities is at a premium. Even in the towns and villages the design of apartments is similar to that in the city so space is smaller.

Villas on the other hand generally sit on their own plot of land. They are generally only constrained by the limits of the plot as they facade and rear need to be 5m away from the front wall and the sides need to leave a 3m gap. However villas that maintain these distances tend to be small as they are inevitably on smaller plots. (Careful when looking at villas nearer to the side of a plot than this as they may well have been extended illegally.)

Townhouses are generally older, built when demand for space wasn’t at such a premium and often designed for large families to live in meaning they have plenty of bedrooms, and are often spread over two or three floors.

Townhouses tend to be more readily available outside of the city for example. There are very few available in the city as the city is dominated by apartments. Only in areas like the Cabanyal, Benimaclet and Patraix can you find greater numbers of townhouses but they tend to be like gold-dust, especially in the Cabanyal, and when they are listed for sale they sell quickly.

In the towns and villages though townhouses tend to be the norm for the type of property available and the further you go out from the city the more townhouses become available.

However, you must be aware of one thing above all others. In almost all cases your townhouse will need work, a lot of work. Many of them are inherited from recently deceased parents or have been empty for years since the owners moved into the city for work or family reasons. This means they are often musty (Or just plain damp), dark as the small windows to keep out the summer heat have never been replaced and the furnishing may just remind you of the Spanish Civil War years.

This need to do work though should not daunt you, almost all of the recent sales of apartments have involved a modernisation post purchase. A great looking kitchen ten years ago might not be a great looking kitchen today, we are looking at you gaudy, bright colours and shiny, glazed surfaces, and replacing a hundred year old kitchen is a similar price to replacing a ten year old kitchen.

As you can see above, townhouses do not tend to be kept in great condition. In fact they are often neglected to the point of total disrepair. And it is your responsibility as an owner to keep the townhouse in decent condition of course. If there are roof leaks it is down to you to get them fixed, not the community. In an apartment repair costs are shared between the community so are lower, however you also have costs that may not directly affect your apartment in the community and upgrades to the building are partly your responsibility.

Townhouses will probably have more problems from roof issues, potential damp patches, the pipework being old, the electrics being ancient and many other possibilities. This is also true for villas of course but villas tend to be more modern than traditional townhouses. You need to bear this in mind when looking at purchasing a townhouse which is why a total modernisation can help spruce up a property internally whilst essentially looking the same from the outside.

As the name suggests townhouses are generally in towns but when we talk about location we are more concerned about where within the towns and what they are near to. Townhouses are often clustered around the centre of the towns, by the town hall, the biggest church, the largest parks etc… They also ten to be near facilities such as local shops, bars, restaurants etc… which are also clustered around the centre of towns. Therefore they are very well located for not requiring a car to do everyday tasks such as shopping, meeting up with friends and finding entertainment.

For those of you looking for an easy life away from the reliance on a car then a townhouse can work really well. However bear in mind the public transport facilities of the town in question. We have written about this before here for various towns around Valencia and we have looked at how far they are from the city by car here.

Villas tend to be outside of the towns with certain exceptions such as L’Eliana and Ribarroja for example where the villas can be easily within walking distance of the facilities of the town. Therefore, you need a car or maybe some other form of vehicle such as bike, electric scooter or hoverboard to get in and out of the towns, especially in the summer heat.

For many people this is the most important aspect and the good news is that a townhouse usually works out considerably cheaper per square metre than an apartment or villa. However you should bear in mind that your modernisation will cost more mainly due to the fact that townhouses are a lot bigger and your modernisation cost is usually worked out per square metre and there is also the fact that almost inevitably you will need to put in new plumbing and electrics on the older houses.

Also bear in mind location. The further you get away from the city the more affordable townhouses become. Townhouses with a lot of space in the towns very near to Valencia such as Rocafort, Godella and Burjassot (Also on the metro line) can be a lot more expensive than those in Betera, La Pobla de Vallbona and Lliria (Also on the metro lines but further out).

Advantages and Disadvantageous of Each Type of Property

In our article about towns around Valencia to get a great lifestyle we mentioned many great towns. However, we didn’t mention places closer to the city such as Burjassot, Godella, Benimamet and Rocafort which almost form a part of the growing city these days. We also didn’t mention the places on the metro and railway line to the north of Valencia like Meliana, Albalát, Almassera and Alboraya which also offer plenty of townhouse options for sale.

On our homepage you can see more and more options like this being listed now and we will continue to list more as demand for this type of property increases. The best recommendation we can make is to keep an eye on the site and contact us using the form below to let us know what you are looking for.

This is a townhouse but unlike many mentioned above it is totally modernised and also in the city near to the beach. Read on.

“Now that we can all work from home, maybe you are thinking of moving to Valencia city from the UK or Ireland? But perhaps not sure if apartment living is for you, like those crazy foreigners living up on top of each other?

Well have a look at this. A proper house just a few metres from the beach, but still in Valencia city. It is in the Malvarrosa beach area, and it really is so close to the beach that any closer you’d be nervously checking the sea level rise everyday.

3 bedrooms and 3 bathrooms, a back yard and a front garden (I told you it was a proper house), a garage and a basement, lots of room for the surfboards, paddleboards, jetskis etc. Completely renovated and modernised, ready to move in.

This property is similar in price, size and layout to many houses you might find in the suburbs of cities in Britain and Ireland. But of course they aren’t 200 metres from a wide sandy Mediterranean beach. So come on and make the move. I might even know a man who knows a man who can hook you up with pirate UK cable TV. You will want for nothing! No more excuses, get in touch with us now.”

And if you liked this….

We try to keep the quality up and have written plenty of articles that may interest you before. Here are just a few recent ones, just click on the images to read more.