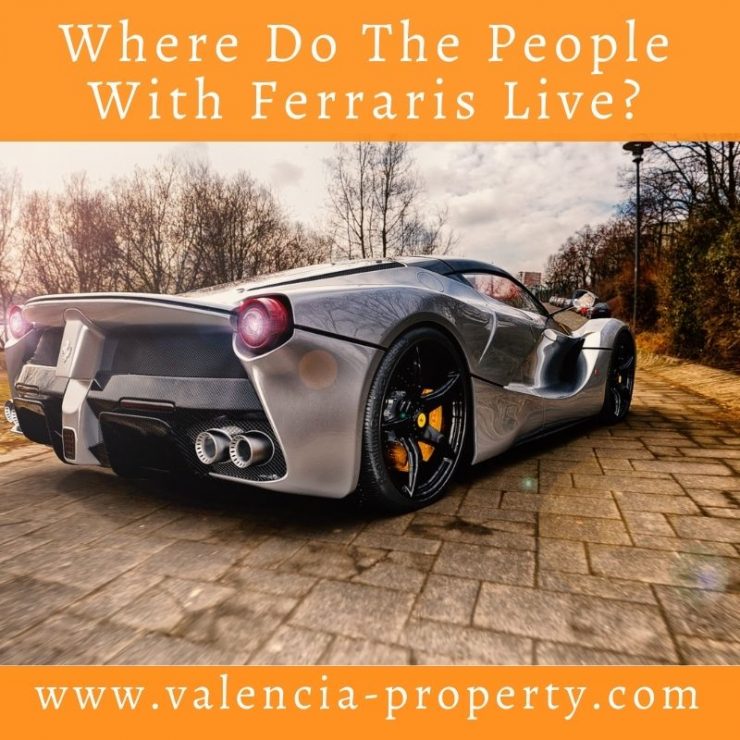 It’s not my bag and it’s not my style but a question posed this week by a client moving to Valencia in January piqued my interest. They are looking to move to Valencia and wanted to be in an area that you could class as “High End” Valencia, the question was “Where do the people with Ferraris live?”. So today we are going to list the areas where the people with Ferraris live so you can either aim to join them or totally avoid them because your requirements involve much more than living in an area where people wouldn’t give people like me the time of day ;-). (I’m sure the potential client was joking but if it gives me material for a blog post then I’m good with that.)

If you have been reading these pages for a time you will know that I really don’t give a flying f*ck where the people with Ferraris live so consider this post more of a public service as opposed to an aspirational one. In the past I once went to Marbella, believe me once was enough, and the first thing I saw as I got out of the car behind a Lambo was a painted 80 year old with 30 year old boobs wrapped in a fur stole carrying two chihuahuas and I immediately knew that I didn’t belong, and never wanted to belong either.

I prefer a good menu of the day to fine dining, cider to champagne, Ryanair to first class flying and Liverpool to London.

However, I do know where I don’t belong and luckily for me places like that are few and far between in both Valencia and Spain as a whole. Valencians are creatures of habit and they prefer living close to facilities and convenience rather than on a gated estate with 24 hour security in the middle of nowhere. So even the richest people, the Ferrari set, can be found all over rather than all congregated in particular estates cowering behind their alarm systems and retreating into specially built panic rooms (And yes I’m looking at you London and especially you 1 Park Lane dwellers) Nevertheless, there are areas where you are more likely to find the Ferrari and Maserati set and today we will look at where they are.

Inside the City of Valencia

It’s more a case of roads than neighbourhoods as there are more exclusive roads within each neighbourhood. You can check out our four part guide to the neighbourhoods of Valencia here. The most exclusive neighbourhood in probably Ensanche, and no I don’t mean the bohemian Ruzafa part of Ensanche I mean the part packed around the Mercado de Colón and Calle Colón. Just because the word “Colon” appears doesn’t mean it’s sh*t of course as “Colón” is the Spanish name of Columbus, I don’t know why we change it to Columbus in English as the Spanish don’t call Bill Gates “Guillermo Puertas”, although they do call Queen Elizabeth “Isabel” so go figure!

Anyway, the area of Colón and more specifically Calle Colón itself, considered to be the most expensive street in Valencia, and roads like Feliz Pizcueta, Jorge Juan, Hernan Cortés etc… leading down to the Colón Market are full of high end boutiques, classical facades, exclusive gyms, and more expensive cafes and restaurants. I am pretty sure there will be the odd Ferrari hidden in the underground car parks on these roads.

Other areas that may pique the interest of someone looking to find like minded Ferrari owners include the Plaza de America, Porta de la Mar, Jaume Roig near the Viveros park, overlooking the City of Arts and Sciences on the South side and Calle Isabel de Villena by the Malvarrosa beach in one of the mansions. The truth is there are few conglomerations of Ferrari owning people in the city for the reasons outlined above. To find greater concentrations of Ferrari shallowness we need to move outside the city.

We have talked before on these pages of how much we rate Puzol as a place to live, for us it gets a seriously below average 2 out of 10 as a town. There are many many better towns to live around Valencia, see our guide to the best here.

Puzol however does have two gated estates which are very exclusive and keep the riff-raff like me out (unless you know the back way to get in like I do). You’ll find footballers, industrialists, old Valencian money and the nouveau riche on Monasterios and Alfinach and you’ll pay for the privilege of living there and never getting to know your neighbours as you live behind high walls and with 24 hour security to make sure those same neighbours aren’t mixing.

The one saving grace on each estate is the social and sports club they each have where you will find sports facilities, a restaurant, huge swimming pools and more where you meet up with your equally rich friends to the exclusion of all of us plebs who don’t live on the estate. However as an outsider you won’t get to know anyone, your kids will though as they participate in sports at the social club.

So, Monasterios and Alfinach are the first two places where you may see the odd Ferrari outside of the city. You might find one on Monte Picayo too near the casino but it’s a bit steep and those hills and uneven roads don’t lend themselves to smooth Ferrari drivers.

Old Valencian money lives in Santa Barabara in Rocafort. Very near to Cambridge House school there is an access road in to serve the estate and a guardhouse as you go in. Also, Valencian political money lives there and that explains why there is a tunnel with extremely thin lanes above it so the residents (Politicians) didn’t have to wait thirty seconds for oncoming traffic to clear, they built a tunnel and roundabout for themselves where there really wasn’t enough space, thus inconveniencing all other road users, especially the drivers of the school buses who have about 1cm either side as they go up the road, just so they could get out easily.

Near to Santa Barbara you can find the Valencia tennis club, it has its own social and sports club and it is next to the town of Rocafort where you may also find a few Ferraris near some of the mansions on the way into the Old Town.

La Cañada also has a higher density of Ferraris per 1000 inhabitants and this is because I know of one garage that has three parked up and hardly ever used. Slightly nearer to Valencia than L’Eliana and with excellent communications to the centre this is not a gated estate but all of the big houses have huge gates and walls behind which the average Ferrari owner cannot see the outside world and the outside World can’t see their sparkling Ferrari. Where there are Ferraris there are large expensive villas of course and La Cañada has more than its fair share.

L’Eliana is one of our favourite towns around Valencia and that is despite it having a few Ferrari driving inhabitants. The town has an exquisite park, plenty of cafes, bars and restaurants and plenty of parking spaces for those Ferraris when they come into town to visit. The great thing about L’Eliana though is that many of the houses are walking distance away from the town centre so the Ferraris never get to pollute the town itself with their noxious fumes.

Around the 27 hole private golf course called El Escorpion in Betera you will find plenty of boxes, houses constructed in the last ten years of so when it seems that most architects and builders were in their cubist phase – like Picasso but without noses on the sides of heads. These modernist houses require a modernist car to go with them and while you can find plenty of Teslas you can also find the odd Ferrari buzzing around making much more noise than the Teslas.

Just off the CV35 heading out of Valencia, hidden behind the 24 screen cinema complex at Heron City with its bowling alley, gym and restaurants you will find old money Campolivar and Gated Estate Cruz de Gracia.

It’s a surprise to find so many Ferraris around this area as their low slung design doesn’t lend itself well to the bumpy roads thanks to old tree roots popping out of the ground and large school buses that traverse the roads of Campolivar first thing in the morning and at school home time thanks to the large numbers of private and international schools in the area and the sleeping policeman that these days accompany areas with schoolkids to slow down the traffic. However there is plenty of money here and where there is money expect there to be someone stupid enough to be going through a mid life crisis and buying themselves a top down red Ferrari.

If you want to live among the Ferrari owners then contact us as I am sure we will be able to disabuse you of that idea and find you somewhere much more acceptable to live where you will have a better lifestyle and the neighbours might want to talk to you. You could also take a look at this article from El Pais where you can go down to the granular level of streets to see average salaries in each part of Valencia or Spain as a whole.

However, like many of our tongue in cheek posts there is actually some truth behind the skit. You are less likely to be able to become a part of a community “where the Ferrari owners live” as they don’t generally participate in that community. Old money begets friendships of other old money. Families stick with families they have known for generations. You are much better looking elsewhere and we can help you find it. Contact us on the form below to let us know your requirements.

Just click on the images below for more of our articles about living and working in Valencia and also to check out some of our properties.