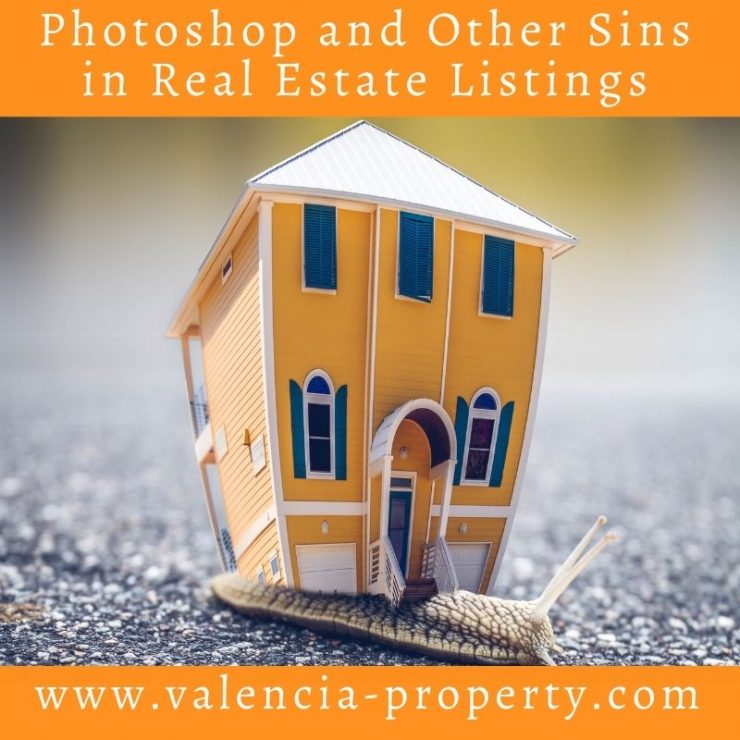 If there’s one thing we have always had clear at Valencia Property it’s that we will not use photoshop to make photos look better. We will not show you a CGI render, we won’t add in details that aren’t there or put in an artist’s impression and we will not put a plan of the property up which then turns out to be what it could look like once you do a modernisation costing fifty thousand Euros. And this is especially important when you are looking at property remotely which is where most people start their property search these days.

The Issue for the Remote Buyer

As someone looking to buy Valencia Property but starting your search from abroad we recognise the need for trust from the start. If we show something that isn’t there and then you fly all of the way from California/Toronto/Sydney or even just Northern Europe to see that property and the reality doesn’t match the image presented then we are sure that you are not going to be too happy. In fact you would have a right to be rather annoyed.

Not showing the reality of a property is essentially what photoshop does but there are other tricks too.

It’s not just limited to photoshop. Wide angle lenses, distorted vertical lines using fish eye lenses that are then straightened at a later point, added artificial lighting that makes a property look light and bright when it isn’t and, worst of all, the staging of photos where an interior window overlooks the blue of the Mediterranean but in reality it looks onto a grubby lightwell. Yep, we have seen them all.

You really need to know what the realities of property in Spain are and in this article we are going to tell you what the photos on the internet don’t, what they don’t show you when looking at photos on real estate websites. Bear in mind that the following are things that might be in a particular property, it’s not generalised, but you need to know that it might well be the case. And if in any doubt ask!

If you cannot see any views from the apartment or house then you can safely assume that the property doesn’t have them. Views are a selling point so why not include them? It’s because there aren’t any. This is especially true of a city like Valencia which is in large part totally flat. There aren’t that many places that have great views from the apartment itself, don’t expect the hanging gardens of Babylon or herds of wilderbeast roaming majestically over the Serengeti. If there are views, maybe of the riverbed park, a stunning facade opposite, the City of Arts and Sciences, a church bell tower, the main square or something, then rest assured that there will definitely be a photo with those views. Beware though, some agencies add in photos of the best parts of the area nearby or even general views of Valencia. This means there are definitely no views from the apartment itself!

If there are no pictures of the stairwell in an apartment building or the entrance to the stairs then it’s usually because it’s a bit grubby and unkempt. A fantastic property can have a grubby stairwell though so it shouldn’t mean you discount a particular property if the entrance is awful, many communities spend their time arguing about whether to spend the money on updating the entrance and stairwell and over the last ten years many of them have upgraded them making the welcome home much nicer.

Sometimes the property is an interior apartment. What does that mean? It means that there are no street views from the front of the building. The apartment is to the rear. This often happens in older apartments in larger buildings where there are two properties to the front of the building and two to the rear. If there are no views on the photos of the street then you might find that the apartment is interior. However, why wouldn’t an agent tell you this? That’s because the Spanish don’t like interior apartments, they want to see life happening on the street, they like noise and they like wondering what that bloke with the dog is going to do next… This was especially important during the lockdown a couple of years ago as the people in apartments that were interior effectively spent three months without seeing anybody else. To a Spanish person this is essentially purgatory.

There’s a fantastic “looking” place for sale in Naquera at the moment and it has been staged to within an inch of its life. The photos are ‘shopped and the place looks great. What a photo cannot show though is the smell when you enter, that distinctive smell of damp rising through capillary action from below into the walls and making it pervasive throughout the house. Most Spanish houses didn’t used to have a damp course because… well… just because. However, having over 300 days of sunshine a year doesn’t mean we don’t get wet weather and doesn’t mean that damp can’t rise. And in many old houses you cannot see the damp because the walls are tiled to 1m high so it doesn’t show on the photos as any sort of discolouration.

The photos you see on a property might well have been taken years ago, when the house wasn’t used as a repository for all of the detritus of the extended family. You won’t believe the number of times we say to owners that they need to declutter, Marie Kondo hasn’t had much influence in the Valencia property market. The amount of stuff people collect over the years is unbelievable. We have even turned up at properties that are a totally different colour to what is shown on the photos at times because “We repainted about five years ago”, meaning the photos are from even longer ago.

Did you know that the u-bend wasn’t common in Spanish drains for many, many years. The u-bend allows a reservoir of water to be between yourself and the smells emanating from the drains. Lots of places have a distinctive smell coming up from the drains when you enter, especially when the place has been empty for a time. Of course the photos cannot show you this, they are not scratch and sniff.

The photos will only show you the neighbourhood if the immediate locality is “good looking”. If it isn’t then guess what, no photos. You must take into consideration that Spanish property adverts very rarely give you the full address of the property. This is not because they don’t want you to know, it’s because most agents don’t want other agents trying to steal their listings. However,ask and they will usually tell you where the property is.

What We Do That’s Different

We try to give you the most exhaustive information about properties but at the same time we want you to know more too. So, ask and we will let you know. We describe the property in detail, we have 360º photos that show everything and we will even use a drone to show places from above when allowed. Most importantly, we will tell you what is wrong with a property when there is something to know. We don’t want you to have to travel across the globe to find out that the property you were interested in is a bit… meh! And we work for you, the buyer meaning there is nothing hidden. We want you to actually have a good experience as a buyer of Valencian property believe it or not.

Golden Visa Property of the Week

A house so close to the beach that you can time your walk to the sand in seconds rather than minutes. Located on the Patacona beach. You have the option of 5 different bus lines or metro to get you to and from the city centre should you require, but with all the restaurants and amenities at your disposal you won´t need to use them all that much.

This four-story 262m² property comes with a 15m² storage unit plus a garage with street access. 3 double bedrooms all with their own balcony, 2 with built in wardrobes and 1 with en suite facilities are located on the 3rd floor while the top floor has space to be used as a bedroom/office/games room with it´s own bathroom.

While the current decoration would best be described in Spanish as being “Garrulo“, (I´ll let you google translate that one for yourselves, but the frog hanging from the ceiling in the living room and that one bedroom that looks like Louis XVI and Marie Antoinette decided to downsize will probably give you an idea of what I mean) Once you buy the place, you’re free to do as you please, and you will, and this property has space aplenty for you to do just that.

Property Of the Week

This flat has nice floors
And very new doors
And from the big balcony,
There’s plenty to see

Now there’s only one loo
So there might be a queue
The three bedrooms impress,
Maybe one’s an office.

It is exterior
Which is always superior,
On the fifth floor,
Who’d want to be lower

This place will be gone
Before very long,
So don’t wait to act
And get in contact