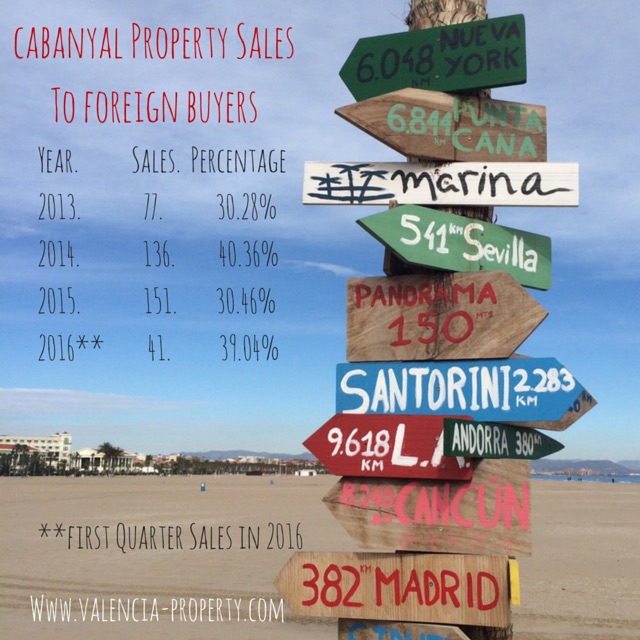 According to the latest reports from notaries and the property registry the Cabanyal is no longer the hidden jewel it has been for the last few years. People are actually finding it. A report in Las Provincias newspaper lays out the full picture. Over 400 foreign buyers have bought property in the Cabanyal in the last three years. Now that may not sound too much for you but when you consider that the Cabanyal is not a huge area and that this number made up 30% of all sales in 2013 and 40% of them in 2014 then you may notice a little bit of a trend.

We have written about the Cabanyal before in this blog along with the Malvarrosa and the Patacona, Valencia’s three beach areas. We continue to promote the area strongly because we are convinced it offers the best value for money of anywhere on the Spanish Mediterranean Coast, a place full of tradition, culture, life and relaxation.

The breakdown is even more interesting. Of those foreign buyers see the table below

It is interesting to note that the percentage of sales to foreign buyers dropped dramatically in 2015. However the actual purchase numbers rose, showing that the Spanish market is also waking up to the fact that the Cabanyal gives you exceptional value. Apparently Madrid is the place most attracted to buying in the Cabanyal from other parts of Spain and the Madrileños are looking for a second home.

Of the foreign buyers there is an ever greater amount of buyers from the UK with 25 of the 151 purchases last year being from UK buyers (16.61%). Just behind came the French with 22 purchases. I think Valencia Property sold about half of that number in the Cabanyal last year so we are partially responsible for this number of British people buying there :-). British buyers are up from just 8 in 2013 demonstrating that the increased purchasing power of the pound against the Euro and the drops in prices until they hit base were affecting the number of purchases made. Hopefully the trend will continue.

The average sale prices also show rises over the last few years and they show that the British are buying places with a higher value than the French or Italians for example with the average price paid by the British 75000 Euros followed by the French on 71800 Euros and the italians with 55000 Euros (Such small sample sizes mean these figures do not represent a trend of course.) Anecdotally, one Chinese client bought a building for 630500 Euros looking to develop a hotel according to the notary involved. These prices demonstrate not only the value for money and opportunity in the area but also that many buyers are buying to rehabilitate and better the area too.

So, how can you find your ideal place down by Valencia’s Cabanyal Beach? Firstly check out our properties in the Cabanyal and other beach areas of Valencia here. Secondly, send us a mail if any of those properties interest you, just click the more information button on the property page. Finally,  let us know more by signing up to our mailing list below

We look forward to seeing you soon in Valencia and do yourself a favour and get down to the Cabanyal before all the bargains go.