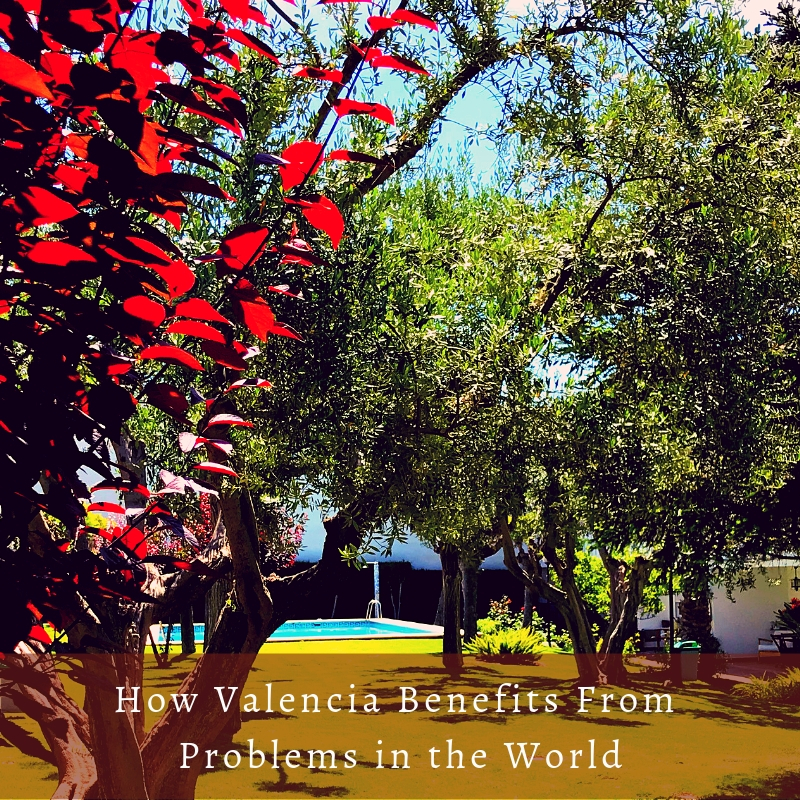 Originally this post was written on the Spanish Property Network in December 2015 and I have updated it here and made it more relevant to Valencia. Take a look.

Every day it seems the World gets more dangerous, politicians are utter cretins, hello Mr Trump, and countries decide to limit the possibilities of their own citizens by the incredible stupidity of Brexit, of course we are looking at you here United Kingdom. Mr Putin sends killers to poison citizens of other countries with disdain and there are streams of refugees being forced out of their countries because of internal civil wars or because one of the major World powers is bombing them back into the Stone Age.

You can concentrate on that very easily because of the pervasiveness of rolling news channels and TV companies feeling they should allow a platform to hate speech from the likes of Farage, Bannon and others in the name of balance.

The truth funnily enough is the opposite despite all of these appearances and narratives. The World has never been safer according to official figures, but don’t let facts get in the way of a good scare story. The scare stories and stupidity of certain countries work for Valencia and Spain because, despite the fact that it was only a matter of time before a terrorist attack hit Spain, and it happened in Barcelona last year, Spain is considered a safe haven from the madness of the World and Valencia a safe port in that safe haven as it is not the most likely place for anything scary to happen. It’s not in a heavy earthquake zone, there are no active volcanoes nearby, the climate doesn’t have extremes of heat, hurricanes or water, it is highly developed, it is not the focus of the country as a capital, and it is not even the focus of an independence movement like Barcelona and, to a lesser extent these days, Bilbao.

There are though many countries having problems in the last few years and Valencia is benefitting from problems elsewhere both perceived and actual. Let’s take a look at how.

Firstly, the background. Some years ago Spain put in place the Golden Visa to attract foreign, non EU, residents into the country. The limit was set at 500,000 Euros investment initially in property or more in the case of government bonds. This made Spain a target for people looking to get out of problems in their home countries.

The initial stages of it were a bit of a disaster, just 87 visas granted in the first six months. This was because it was unclear if the investment was for each member of a family, whether it had to be in just one property etc… However, the update of the law made it clear that dependent relatives and family were included in the deal, you could spread your investment over various properties and also you could work here, and this was the clincher because in the initial law although you could live here you had no right to work here meaning many people couldn’t take advantage of the law, they needed an income of course. Allied to the Entrepreneur’s Visa which allows people to come in with business plans and the ability to employ people in Spain the options looked good for people wanting to get out of some scary situations around the World.

So how is Valencia benefitting from the problems in the World, perceived or otherwise? Which countries are providing flows of new residents coming into Spain and why?

Record numbers of tourists visited Spain year on year in 2014, 2015, 2016 and 2017. Numbers have reduced slightly in 2018 due to a hot summer in Northern Europe for one thing but tourist spending has increased still. Spain has benefitted from problems in countries such as Egypt, Tunisia, Morocco, South Africa, France, Greece and its Islands and Cyprus (The banking crash and haircut for investors included) over the last five years or so. Equally tensions, not to mention an all out war and occupation, between Russia and Ukraine have meant the Black Sea is out of bounds for many Russians so they are discovering the Mediterranean coast.

The weakening of the Euro against a basket of currencies over the last few years has meant an increase in tourism and investment from countries that don’t have the Euro such as Sweden, Switzerland and the United States. This was also true for the UK pound before Britain decided to castrate itself. This is true at a personal and institutional level. Also there has been a huge increase in investment from Russia despite the precipitous fall of the Rouble against all currencies as capital flight from Putin is huge.

The Arab Spring was a movement to get more democracy into certain Arab countries, North Africa, Egypt and Iran among others. Despite the hopes and expectations of the people it mostly caused a worsening situation in those countries after the dictators were thrown out, replaced or killed or in Iran’s case a crackdown on social media. The vacuum in power that was left was mostly filled by chaos. Libya, for example, now is an absolute mess and we are seeing a number of enquiries from Libyans desperate to get their money out of the country which is difficult due to sanctions of course.

Oil prices being so low for a number of years now has meant that many cash rich oil and drilling workers and engineers have been laid off and they are looking at safe havens for themselves that offer safety and good value for money for their families. As they are mostly paid in dollars and the dollar has been so strong against the Euro we are seeing many of them resettling in Spain at least temporarily. Many have found they have been priced out of their home markets such as the South East of England, major American cities and even the places they were living in the Gulf and so the greater value available here has been a good thing for them.

The low oil price has also meant that petrol and transport costs have fallen meaning people driving in Spain see it as cheaper and also the transport sector has reduced its costs making it more competitive economically too.

Attacks in France, Tunisia, Egypt and Turkey have meant that Spain is perceived as a safer haven than certain other countries. I fully expected Spain to be a target for the terrorists the same as other countries when I wrote this but the attacks in Madrid of 2004 were the only ones until the Barcelona attacks last year and have largely been forgotten as more recent events focus the World’s attention. So far the Spanish police are doing a good job managing to thwart other  supposed planned attacks but that may not last forever.

There are political problems in many areas and insecurity in those countries with political problems is forcing many people to leave. Prime areas where people are coming from into Spain because of this over the last few years have been South Africa, Egypt, Venezuela and even the United States. (Believe it or not we have many clients from the United States because they do not feel safe in their country or are sickened by the reactionary politics of certain sectors and the possibility of nutjobs like Donald Trump or most of the Republican nominees getting power.) I wrote that bit three years ago but thought I would keep it in as it actually happened and increased the flow of Americans looking to get out of an increasingly mad country!

Venezuela has also seen large numbers of people escaping the collapsing economy of Maduro. Obviously Spain is a place they turn to because of the common language.

South Africa is getting more and more dangerous and the value of the Rand is falling massively. The difficulty for many South Africans is actually disinvesting in the country and if they manage to do this actually getting their funds out of the country.

Valencia has even been taking refugees from Catalunya recently both in terms of people and businesses. This is because businesses don’t want to headquarter in Catalunya if the independence movement gets stronger because they have seen what is happening in the UK with Brexit, companies want to be in the EU and if Catalunya secedes then Spain would inevitably blackball their accession into the EU initially. Therefore, many headquarters have moved out of Barcelona to the rest of Spain (Banks have led the way) and many people have followed, especially those who are free to move due to lack of family ties. The number of foreign clients that have visited us recently after discounting Barcelona for their property search due to the perception of instability is amazing.

Spain itself had an inept and immensely corrupt PP government which finally collapsed due to its own internal contradictions this year. The new government is supported by a loose coalition of progressive parties after their successes in running major city councils such as Madrid, Barcelona and Valencia also in coalition.

Spain can’t even be considered dangerous as crime figures are low and getting lower and the perception is that you are safe on the streets in Valencia even late at night. This is not always true in all cases of course but the feeling of security in Valencia is very high.

Valencia is in a good position to continue benefitting from problems elsewhere, it is a great place to live and also a relatively cheap place to live compared with other major cities in Spain with a great quality of life and a feeling of safety. Until any of those factors change Valencia will continue to do well from all the problems in the World even if those problems aren’t actually as bad as they seem if you are an avid follower of 24 hour news programmes.

If you like this article then you may like our other more political articles about Brexit, Brexit again, Brexit yet again, Trump, Trump again, Trump Yet Again, and the full monty of Brexit, Trump and Catalan refugees. You might also like this video where we give you reason number 54 for thinking about if you are moving to Spain. Don’t say we don’t wear our heart on our sleeves here.

And remember you will need a NIE number to buy a property here so you may as well start the process of getting one right? Click on the image below and read the latest situation regarding NIE numbers in Valencia