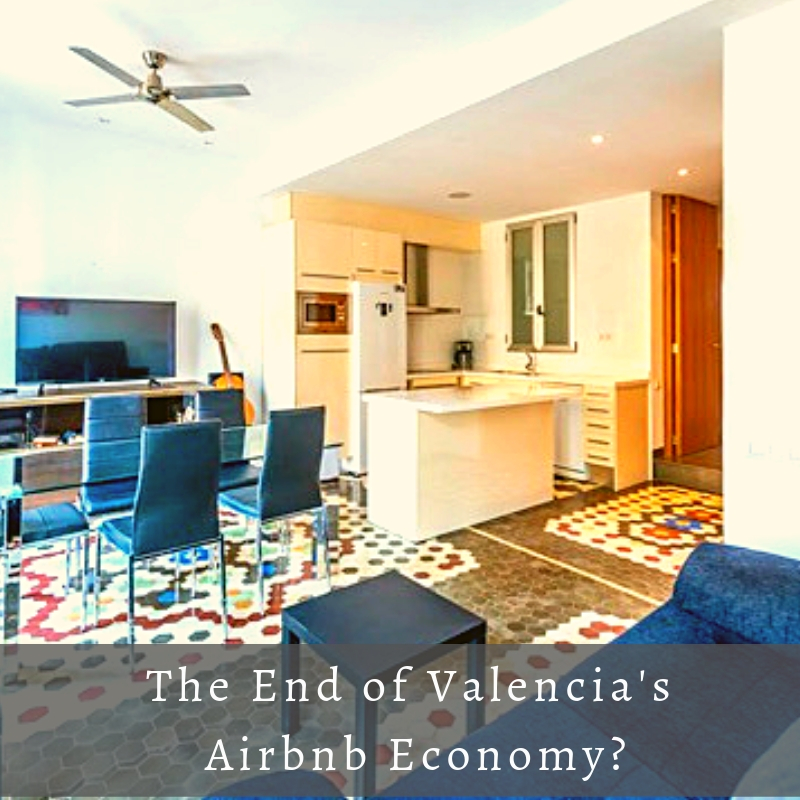 “Yeah, I’m interested in getting an apartment in the city to rent out on Airbnb”

Well, that is you and everybody else too. The number of requests we get from people wanting to take advantage of the Airbnb boom in Valencia has grown and grown over the last few years. It started small and as Airbnb grew all over the World, here in Spain especially so in Madrid and Barcelona where it became a scourge, Valencia tagged along. Before we get into how it has affected the city and which areas in particular let’s look at a bit of history.

Airbnb and other short term rental sites grew out of the “Couchsurfing” craze of the early noughties where people would put up their couch for free or their spare room for a small fee on sites such as Craigslist. Originally designed for people to rent out their spare room or rooms to travellers looking for something other than the sterile hotel experience but not wanting the hostel experience either, it developed over the years into renting out whole apartments or houses, often second homes or properties bought specifically as short term rental apartments.

Looked at in isolation this isn’t necessarily a bad thing but when something becomes a craze and is seen as a great way to make money after the financial crisis, when many traditional asset classes weren’t paying much interest, buying an apartment and renting it out was a way to get a return on investment. The problem comes along when there are so many short term rentals available that it affects the long term rental market, no long term rental supply for families unable or not wanting to purchase property and when those short term rentals push up prices of property so much that many others are also forced out of the chance of buying their own place and there are few options to rent.

Originally the Airbnb economy was a Wild West of lack of regulation and quality control. The hotel lobby furiously contacted governments and local councils with threats to pull out of towns and cities if nothing was done to quell this new competition. Central government in Spain abdicated responsibility for licensing of Airbnb properties to regional governments and each region came up with a different set of rules for whether you were able to rent out your apartment. Madrid for example put in a rule that all stays in tourist accommodation had to be of five days or more which was specifically designed to protect hotels and their “weekend away city break” market. The newly formed lobby of tourist accommodation owners campaigned against this and won in court meaning Madrid had to start again. Now every city and region has their own rules and regulations and if you are going to by a property to rent out short term then you need to know the rules.

We are more interested in Valencia of course so let’s get deep into the weeds.

The areas most affected by Airbnb rentals in the city are El Carmen in the centre, Ruzafa, Cabanyal and Malvarrosa. Every day you can find people dragging their wheeled, Ryanair sized suitcases around these areas either moving in or out of their tourist rental. Prices in these areas coincidentally are those that have risen the most in the last three years in the city, in some cases by around 100%.

The first draft of the Holiday Rental Licences law was passed in 2009 and this was modified in 2015. This made it compulsory for all tourist rental apartments to be registered with the “Registry of Businesses, Establishments and Tourist Professions”. Once you registered you got your licence number and for a few years now you have required your licence number to be able to advertise on Airbnb and all of the other portals, if it wasn’t published then you and the portal could be fined and the fines were huge for individuals. (The English guide to the process can be found here translated by the good people at Spain-Holiday.com) You can find the form you have to fill in to apply for a licence here.

In order to apply for the licence in Valencia you need to send your completed application to the Registro del Servicio Territorial de Turismo, Valencia, Plaza Alfonso el Magnánimo 15, 46003, Valencia. For details of what your property needs to have in order to be granted the licence in theory refer to this excellent overview by Louise Brace on Spain Holiday.

But here is where we go back to the title of this article. Why are we calling the end to Valencia’s Airbnb economy? (And when we talk about it we mean in the city itself) There are various reasons but the major one currently is the lack of licences being given out and the termination of current licences on the property changing hands. There are other reasons that we will look into as well.

Firstly, let’s look at the licensing issue. The new rules for getting a licence require the apartment to satisfy various criteria. One of the major changes comes from Law 15/2018 and states

“Any property that wants to be inscribed as a tourist rental cannot do so without a favourable report of urban compatibility given by the town hall“.

In effect the town hall has to come and inspect the property to give it the licence. The first problem now is the lack of inspectors making the process a slow one and the second, the requirements to get the favourable inspection report. Reports are coming in now that applications are being rejected because of various reasons. First floor apartments which are included in the law as being ideal places are being refused licences if the other first floor apartments do no already have a licence. Even in cases where all first floor apartments request a licence there are refusals because “Computer says no” as currently none of the apartments have a licence and what comes first, chicken or egg?

Other licences are being refused on change of ownership of the properties. This is not an automatic right. If the apartment has a current tourist licence the continuation of that licence depends on the apartment having a new inspection and fulfilling the criteria for tourist rentals. The new criteria are much more stringent than when the original licence was given out so it is likely that the application will be refused in many cases. And you cannot just leave it in the name of the previous owner because of course they would still be liable for any infractions committed, insurance issues and complaints.

Next, many communities are now changing their statutes to specifically forbid tourist rentals as they are tired of noise and nuisance from some tourist rental apartments. As a potential owner of a tourist rental in Valencia you should ask for details of the statutes of the community before committing yourself to buy.

Finally, we have to look at saturation point. In certain parts of the city there are too many tourist rentals and too few long or medium term rentals. Also we have already reported on these pages that the areas around the centre of the city are so saturated that no more licences are being granted at all. In El Carmen and other parts of the old city you will not get a licence even if you own the whole building. Equally, you will not be able to change it into a hotel or hostel either.

The suggestion here then is by all means apply for a licence if you think your property satisfies the criteria for getting a tourist permit and is in an area where the council is in theory giving licences out still but don’t be surprised if it doesn’t get one. Of course we have suggestions for those wanting a different solution apart from tourist rentals.

Other types of rentals.

Many of our clients are finding that medium and long term rentals are giving them a much better return than short term rentals without the hassles of licences, community rules or constantly arranging changeovers and cleaning services as we wrote earlier this year. It’s important to read this article regarding the different types of rental for your property in Valencia that we wrote earlier this year (Or just click on the image below).

And if this article has been useful to you then you might also want to look at the following articles we have written recently.