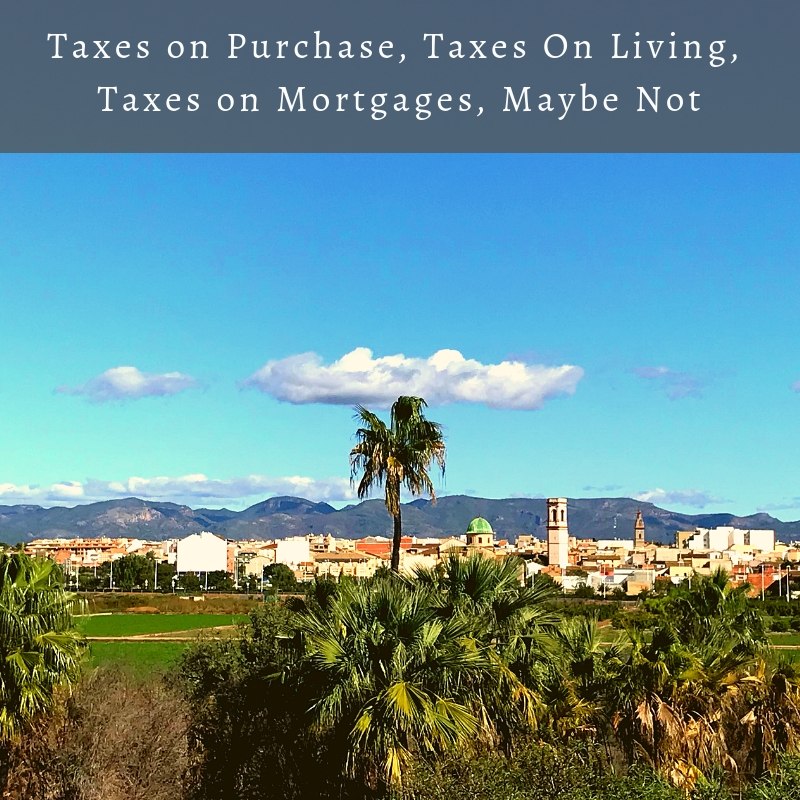 Birth, school, work, death and a hell of a lot of taxes in the middle bit. That’s life right? Just like in any other country, in Spain you have to pay taxes, they fund schools, roads, social security, the health service and a whole lot more. Only dumb libertarians (Grown up children who never learnt to share as a kid) think that tax isn’t a good thing for a society.

Spain prides itself on being a society that is good and equitable but the Spanish are not too enamoured of the taxes they pay at times. Why is that? Well at times it seems that there are a lot of them and the truth is that there are a lot but some are high and some are very low when you compare them with other countries. In this article we are looking at one part of the tax system, taxes on property and purchasing property. Enjoy.

Who Pays The Tax on Mortgages in Spain?

The big controversy at the moment in Spain is whether the banks are responsible for paying the tax charged on mortgages or whether it is the person who is given the mortgage who pays it. For many years it has been the person taking out the mortgage who has paid it but this was overturned in court earlier this year and the banks were given the responsibility of paying it as they are the ones who benefit from giving the mortgage.

The banks appealed and the Spanish Supreme Court changed the decision meaning that once more the mortgage recipient would pay it. At this point the new Spanish government stepped in and legislated so that the banks will pay it in future. Podemos, who form a part of the government, have said that this doesn’t go far enough and are pushing for banks to return the money to all mortgagees who have paid it in the past. Interesting right?

Anyway the banks will not lose out of course. In order to claw back the money they no doubt will increase the interest rates or charge a larger fee for approving the mortgages. This will hopefully open up mortgage provision to greater competition from new banks entering the mortgage arena as they will be able to compete with the traditional banks whose only interest is their bottom line.

The average tax on a mortgage comes out between 1.5-2% of the mortgage amount, it depends on valuation and other factors. So as you can see it is a considerable amount and it matters who pays it. In this article let’s assume that the banks have had their backside whipped and have finally accepted that they need to pay this tax. This will affect interest rates ongoing for sure but should mean that as a buyer you avoid an extra tax upfront.

What Taxes are There on Purchasing a Spanish Property?

The tax rate on purchase of a second hand property in Spain varies from 4% in some special cases of “Official Protection Properties” and in the Basque country to 10% in various other places. The rate in Valencia is 10%.

The first column is the tax rate on purchase and the second the tax on the mortgage, in theory now the responsibility of the banks.

If you are buying a new home then VAT applies at a national rate of 10% except in the Canary Islands where it is 7%. You also have to add on a second tax on purchase which is the declaration of the new build which you can see in the first column below.

What Taxes Are There Annually On Property?

The above figures are high of course. However, they are slightly offset by the annual taxes on having a property in Spain. In the UK you have a very high council tax, in the US a very high Millage Rate that varies from State to State, most other European countries have similarly to Spain an annual local tax on property but their rates tend to be higher than here.

Annual taxes on a typical apartment in Valencia average around 300-400 Euros with cheaper and smaller property being around 150-200 Euros per year. In buildings of historical interest there is also a reduction in the amount paid. These rates cover rubbish collection and many other local services. On a typical house you may pay up to 1000 Euros or more but an average 200k house will have rates of around 400-500 Euros per year.

The tax rate set by the Council is between 0.4% – 1.1% of the property’s rateable (Cadastral) value. Just on a comparative basis my house is similar in size to my parents’ house in the UK and they pay over 2000 pounds sterling per year in council tax whereas here we pay around 500 Euros including rubbish and recycling fees.

If you own a property in Spain but are non resident then you may be liable to wealth tax. However, if you are don’t worry because you can afford it. A couple can have a property up to 1.4 million euros before they have to pay this tax so it only affects a very small percentage of non resident purchasers.

And on that point, if a non resident sells a property then the notary is obliged to keep back 3% of the value of the property for potential capital gains tax liability. If you are not liable for paying this money because there is no capital gain then you can claim it back. You may be liable to pay a proportion of it and if this is the case then you can claim back the rest that you are not due to pay.

Hopefully this helps you make an informed decision on purchasing or selling a Spanish property. If you need any more information we can put you in touch with a local accountancy practice where they are used to dealing with foreigners with questions about their tax liabilities. Just let us know.

And if you liked this article then please consider sharing it with others who may benefit from the information. You might also like the following articles we have recently shared.