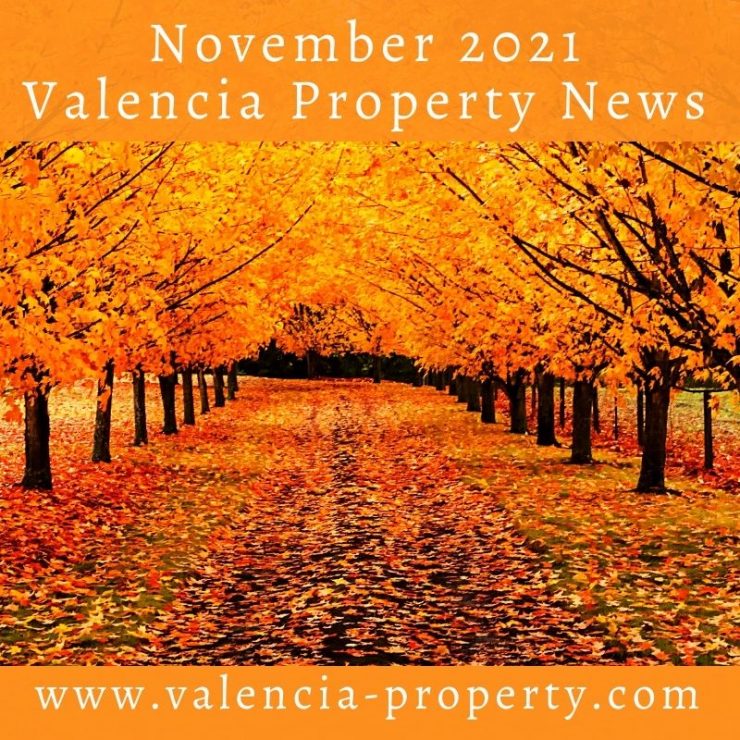 We are not quite there yet but next week is looking amazingly busy so it’s unlikely we will have time to put together this post then. Between sales, holidays, visits and more September and October have flown by and it’s time to look at what is happening in the Valencia Property market to keep you up to date.

Plenty of news in this edition of the blog including some very good news for sellers, (and potentially for buyers too), what is moving on the market, what agents on the ground are saying and some great Valencia Property deals.

Good News For Sellers (And Potentially for Buyers)

There is one thing I have never understood or thought fair on selling a property, “Plusvalia Municipal” This is a tax levied by local councils on sale of a property based on the perceived increase in value of the land the property stands on between purchase and sale. This is charged even when there is a loss on the sale price on the deed which was totally mad!

As you will probably know if you make a profit on a sale then you already pay capital gains tax to the authorities if it is a second property or one where you are not resident. However the “Plusvalia Municipal” is an extra tax imposed at a local level by the town hall. You never know how much this is going to be until you take the sale papers into the town hall and get that surprise, and it’s not often a surprise in a good way like a windfall in your bank account, free cake or a surprise party with all your friends might be.

Now though it cannot be charged by the local authorities as the Supreme Court in Spain has ruled it unconstitutional. Yay! This may well mean that a seller is more willing to listen to an offer on a property as they no longer fear a huge local tax bill when selling. It’s especially relevant hen talking about houses on their own land that has been held for a long time by the owner. We know cases of bills over 40k on properties sold for around 200k where the owner just accepted it and paid rather than appealing. Now that no payment is made it may well be that this can be used as a negotiating tool with a seller who has had a property for a long time.

What Are People Buying?

In the last month the majority of sales have been for apartments in Valencia city although we are seeing an increase in interest for villas in areas outside the more traditional places of L’Eliana, Naquera and others. Plenty of sales around the 200k mark and others going through at the lower and higher ends of the market. We are also seeing more interest in out of town apartments as prices are more accesible. Access to the city is important in these cases and the speed and availability of public transport makes or breaks a place in these circumstances. You can see our article about designing your life and public transport around Valencia here.

The districts of Valencia that are seeing most interest recently are those which are next to the more traditional areas to buy. There are lots of places interesting people in Monteolivete between Ruzafa and the City of Arts and Sciences, Campanar near the Bioparc and riverbed and La Petxina on the other side of the riverbed from Campanar and a short walk into the Botanico area and Old Town. Camins al Grau and Ayora between the beach areas of Cabanyal and Avenida de Aragón are also popular at the moment.

Outside the city we are getting many more enquiries for properties in and around Villamarchante, Paterna and Torrente, the latter of which we don’t really cover as well as other areas currently. Add to this requests for more detail on properties in Burjassot, Godella and Rocafort and we can see a trend towards ease of access to city based along metro lines.

Is The Market Loosening Up?

We talked recently about the tightness of the market with very few quality properties coming onto the market and them getting picked up quickly when they do appear. We expected more properties to start appearing later in the year after the summer period where people were away but this is not being seen clearly in the market. What we are seeing at times are unrealistic valuations and agents listing anything they can get their hands on.

However, what we are not seeing is a lack of external demand. At what is traditionally a slower time of year we are almost run off our feet with plenty of buyers coming into the market from all over the World but the numbers from the USA are particularly high at the moment. This means that sometimes you are not spoilt for choice, check out our post last week about the Paradox of Choice though.

Why People Stop Selling Their Property

Financing the separation, a fit of pique, how much it will cost them to sell and more feature in our “Aren’t sellers strange!” report this month.

From the seller who took the property off the market because her bank “suggested” they may be able to finance her half of the property to pay off her ex rather than selling the property, to the person who thought that an offer 10% below asking price was insulting so removed the property from the market, to the “I will have to pay loads to sell this property as I’ll have to pay capital gains so I’ll wait until the price goes higher and then sell” we get to hear everything and sometimes what we hear is rather strange.

News From the Local Agencies and Brokers

There also seems to be a correlation between those who work in certain areas being busy and those in others not being busy. It’s difficult to believe at this stage of internet presence in our lives but in Spain many agents only work in one area of a small city or just work in a small town.

However, what we are hearing from mortgage brokers we work with suggests that the market is not quietening down. The highest number of mortgages since before the 2008 financial crisis have been granted in the last few months according to both brokers and banks and with banks competing against each other to give the best deals, 2% fixed rate over 20-25 years being a common deal there is plenty of room for manoeuvre still.

Offer prices are still very near or equal to asking prices on most properties. It’s very rare to get more than 10% off asking price and it’s much more normal to be in a battle to buy something by having to go very close to asking price.

Only this week a client missed out on a property by making an offer 6% below asking price and somebody came in and paid full price without needing finance that same afternoon. Deposit left, property off the market. Luckily we had a plan B for the client and we managed to get that at 4% off asking price and secure the property immediately.

Golden Visa Property of the Week

We said last week we had a doozy coming up this week and here it is. Right on the cutoff point for the Spanish Golden Visas at 500k, a country estate just outside Naquera, low profile, classy inside and out and perfect for those looking to get away from it all.

“Spectacular villa, built on what is a mini country estate, over 10.000m2 in total. Great pool and gardens, and a house with a very unique character.

Much of the land is very easy to manage, its undeveloped scrubland. All you have to do is make sure you don’t start and wildfires and it’ll be fine. 3.000m2 is made up of landscaped gardens however. Lots of lawn, a pond and olive trees. And I mentioned the pool, but again, just to be clear its a proper swim-up-and-down pool, just a couple of steps from the terrace.

The house itself is all on one floor, so low profile from the outside. Inside however we have a lot of character. Wooden beams and stone tiling throughout, the house is centred around a lightwell containing a fountain, natural light everywhere. Should I mention elephant in the room? And by elephant, of course I mean Chinese soldier statue and temple. I’d better not, each to his own and look, character, innit?

As I said, spectacular house, well worth having a look at, it really is something a bit different. Get in touch with us and see it for yourself.”

Read more of our recent market reports and posts by just clicking on the images below or tell us what you want by filling in the form.