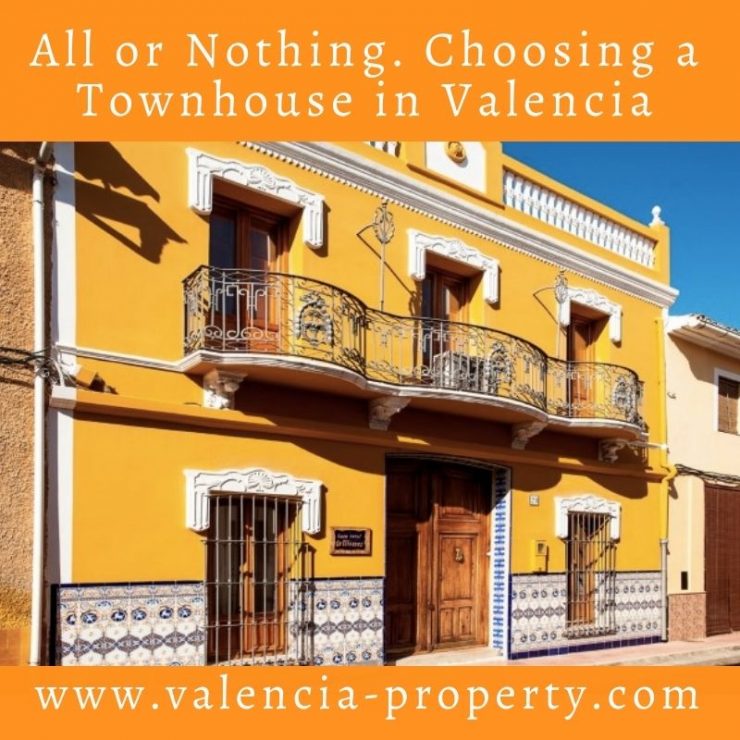 We are getting a lot of interest in townhouses at the moment as many of them offer that perfect blend of space, facilities, value for money and character. On Friday I went to show the townhouse featured in the main image here just to the South of Gandia and I’ve got to say it was rather stunning. Totally modernised in a stylish way retaining the original features such as the original floors and the arched doorways.

However, I also went to see a similar property around the corner but this one required a modernisation. It had a nice facade requiring a bit of a paint but also a litany of issues inside. Read on about the difference because with townhouses at least you get all or nothing.

All or Nothing. Why?

As we have been doing so many visits to townhouses recently we have been looking into the issues that come up in older properties in towns. There are very few modernised townhouses that we view, they all tend to need some work, and when I say some work I mean a lot of work!

You either get the property all done up or you have to do everything.

What does that mean though? Well you don’t just need a new bathroom you need to replace all of the old pipework throughout the house. You don’t just need a new kitchen you also need to change the old wirng so that when you turn your new appliances on you don’t blow the whole electrical system. You don’t just need to look at some damp issues on the wall you need to damp-proof the property. And all of these issues happen in almost every property virtually every time meaning you cannot move in and do the work bit by bit, we are talking about a full reform requiring architect’s plans and a full project.

In a property that is already modernised you avoid all of the costs and hassles of doing up the property but obviously you are paying for the taste of the pervious owner who did the property up. Bear in mind though that because townhouses tend to be larger then the cost of modernisation is higher. In apartments the modernisations are easier requiring fewer costs, damp is very rare for example. Townhouses are usually older than villas or chalets too and therefore they have accumulated problems from a longer time.

The other aspect is that townhouses tend to be inheritances, oftentimes they have been lived in by older people who were used to what they had and didn’t see the need to modernise. It can often be 50 years since the last time the kitchen or bathroom was updated and sometimes longer.

Also many townhouses in the smaller towns were abandoned by people moving into the city many years ago and have only been used for weekends since then and people have allowed them to go to rack and ruin until they decide to sell them because they look at the costs of renovation and say “No Thanks”.

Now, the place I mentioned above to compare to the yellow house had a great facade, it needed a paint but it had a great facade. However, it needed the upper floors relaying, a new kitchen, two new bathrooms, a damp proofing, painting and… oh yes, a new roof and beams, among other things! In other words a potential moneypit because it was also 424m2 and that is a lot of work and a high price in anyone’s estimation.

Could you have had a great house in the end? Without a doubt. Could you be working on it for the next five years? Definitely. Meanwhile you could have something ready done like this below and be enjoying living in it.

We often say that in an apartment you don’t really need an architect’s plan and generally you can knock down interior walls as they are non-load bearing. With a townhouse all bets are off! Walls tend to hold up the upper floors. They weren’t designed that way but over the years the floors have sagged and now lie on top of the walls. Also many years ago houses were built with wooden beams which you have to be careful with making sure you see them because they are often termite ridden.

Getting an architect’s report and plan is important as it will help you to decide what you can do with the space and the architect will help you with redesigning the spaces, important because traditionally houses had lots of rooms for the extended family to live in or visit and that doesn’t really tally with modern lifestyles where we generally want more open spaces with plenty of light.

Licences are important as your house will attract a lot of attention as you do the work including from the local police. There are two types of licences and if you are doing a full renovation then you will probably require an Obra Mayor licence requiring the aforementioned architect’s plan. An Obra Menor licence is only generally enough for changing bathrooms and kitchens etc…

Getting the Work Done

Obviously once you have the plan and the licence you can start the work. The builder should work hand in hand with the architect to give you a quote based on your expectations for finishes and quality. Expect a minimum of four to six months for doing the work and longer if you are doing a full reform requiring structural reforms too. Also finding a builder who isn’t massively busy and is able to do your job at the moment is difficult.

Also be sure to let them know about original features that you may want to restore or keep as these will also have to be factored into the work timescales. This is especially important in terms of metalwork such as bannisters on stairs or bars on windows and wooden doors and windows which require specialist works.

What I Would Do?

If I were sure of the area I wanted to be in and there were townhouses available that suited my requirements and that were already done up I would go for them.

The stress and hassle of a long term modernisation which finishes up costing the same or more than a place that suits 90% of what I want is not worth it in my opinion. However if you are happy renting for a year (oe more) while the work is being done and you really want to get your teeth stuck into a renovation then it can be a really fun project to go ahead with as you see the transformation from dark cave into a modern style living area flooded with light.

Valencia For Digital Nomads Featured in the Sunday Times

We were featured in the Sunday Times this week with an article about the new Spanish Digital Nomad visa which should be approved for the summer of 2022. Details are currently being thrashed out but it looks like similar requirements in terms of income to the NLV but with the difference being you are actually allowed to work as well as live in Spain.

In the latest podcast we talked about modernisations and what to expect. We also had our first interview talking with Corinne about her experience of working with us to modernise a property in Valencia. You can listen in the player below and feel free to share it using the share buttons.

Remember You Can Become a Part of the Podcast?

We are looking for people who have questions about buying property in Valencia and who are thinking of moving here to send in their questions preferably in the form of voice notes. You can send those voice notes to us on our whatsapp 0034657994311, by email or in Facebook messenger and we will include them in the shows as we go along. In order to be useable send the voice note in the following format.

“Hi Graham, my name is ….. and I have a question for the podcast… I would like to know more about…”

If you have more than one question then do the same again on a second voice note and so on and we will put them into the podcast and try to answer them. As we always say even if we cannot answer them then we usually know someone who can and we will get them to answer for you. If we get too many we will introduce a Q+A feature into the podcast every week or do special episodes answering your questions.

We have been listing like crazy over the last two weeks in order to give you more choice in your Valencia Property search. You can see the latest listings on our home page here. By the time you read this there will probably be a lot more properties up there too. We are listing townhouses, sea view apartments, city flats and great value villas. Not too many Golden Visa properties recently but we will have more very soon.